“A Tyrannosaurus For Christmas” Arrives With a Roar 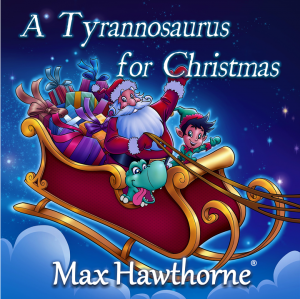 "A Tyrannosaurus for Christmas" (CD cover) 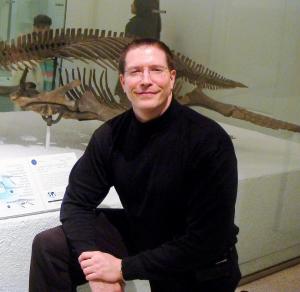 Author/songwriter Max Hawthorne, posing with a plesiosaur at the American Museum of Natural History 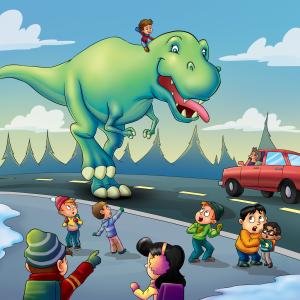 Billy rides "Tyron" the T-Rex in "A Tyrannosaurus for Christmas". Copyright 2019 FFTTP

The hit song by author Max Hawthorne proves that kids really do want a dinosaur for Christmas.

A baby Rex would be the best indeed. Forget Velociraptors or Brachiosauruses. They bite and they scratch and they squash all the school buses! A Tyrannosaurus rex is all I need.”
— Max Hawthorne
BUCKINGHAM, PA, US, December 2, 2021 /EINPresswire.com/ -- It’s an established fact that novelty Christmas songs will forever be associated with the holidays. Whether it’s barking dogs, singing chipmunks, or a bunch of runaway reindeer, animals and their antics are often center stage in these productions. This year, bestselling author Max Hawthorne brings the prehistoric to the present with his nigh-irresistible earworm, A Tyrannosaurus For Christmas.

Hawthorne’s boisterous song uses old-fashioned melodies that get you swaying to the music. The lyrics chronicle the adventures of a young boy named Billy who pines for, of all things, a Tyrannosaurus rex. There are lots of references to other dinosaurs – ones budding paleontologist are sure to know – and Billy explains why a T-Rex is the obvious and best choice for a pet. There’s even an adorable message for Santa, an attempt to convince him to bring Billy a baby dino that will one day be big enough to eat an elephant, “It prob-lee will help him to get Rex off his shelves . . . then he can stop looking for his missing elves.”

A Tyrannosaurus For Christmas is promoted by Musik and Film’s President, Stephen Wrench. Wrench is a music industry legend, and has worked with, played with, and managed greats like Lynyard Skynyard, Survivor, Santana, Toto, Tom Petty, and many more. Since its release a month ago, A Tyrannosaurus For Christmas has been “clawing its way” up the charts, and is currently ranked #11 on the World Indie Music Chart’s Top 100. When asked about his song’s unprecedented appeal, Hawthorne said, “I wouldn’t be where I am if it wasn’t for Stephen and the team over at Musik and Film. I’m beyond thrilled. They felt my song was both catchy and timely. Everyone who’s taken their family to see ‘Jurassic World’ knows that children love dinosaurs; it’s a fact of life. And that includes grownup kids. If you’re going to ask Santa for something, you might as well go big, as in Tyrannosaurus big. Who wouldn’t want to ride a T-rex to school instead of the school bus? Can you imagine the looks on all the teachers’ faces?”