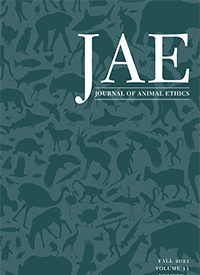 OXFORD, UK, December 21, 2021 /EINPresswire.com/ -- Harry Potter perpetuates imperialist attitudes towards animals as “collectible, exploitable, and only valuable insofar as they provide something valuable for humans”.

The criticism is made by academic Annika Hugosson in her article published in the latest Journal of Animal Ethics (JAE).

Titled “The ‘Care’ of Magical Creatures? A Moral Critique of the Animal Lover Trope in Harry Potter”, she argues that “Though the reader is led to receive Hagrid as compassionate and well-intentioned, he routinely places animals in danger and does not object, even privately, to instances of animal abuse”.

She continues: “Hagrid’s character latently promotes an anti-liberationist view of animals that masquerades as welfarist and compassionate.

“Given the enduring reach of the Harry Potter series and the potential for ‘animal lovers’, including children, to relate to Hagrid suggests the need to more closely examine the animal lover trope in other works of fiction to avoid perpetuating unethical standards of animal care.

“Instead, loving animals should extend to conferring animals with intrinsic moral status which will in turn positively impact animal welfare … [in works of fiction] animal mistreatment has been normalised by its ubiquity.

Hugosson comments “When I re-read the Harry Potter series as an adult, of course many aspects of the story and characters took on different meanings compared to how I read the books as a child. One theme that particularly stood out was the animal exploitation described at so many levels of the magical universe.

As a child who grew up both with these books and with appreciation for animals, I remember identifying strongly with Hagrid, the "animal lover" of Hogwarts, from a young age. But when I took an animal ethics lens to these beloved books many years later - I had questions about what it means to "care" for and "love" animals in this fictional world.”

The JAE is published by the Oxford Centre for Animal Ethics in partnership with the University of Illinois Press.

“Hugosson’s article is insightful and shows how we need to be careful of how we stereotype animals as well as those who care for them. Harmful attitudes to animals should never be normalised, and our language should be changed to reflect that” said journal co-editor and Director of the Centre, Professor Andrew Linzey.

• Annika Hugosson is a doctoral candidate in the Department of Anthropology at the University of North Carolina at Chapel Hill.

• The Oxford Centre for Animal Ethics is an independent centre devoted to pioneering ethical perspectives on animals through research, teaching, and publication. See http://www.oxfordanimalethics.com/home/.

• Details of the JAE can be viewed here: https://www.press.uillinois.edu/journals/?id=jane and the article here: https://muse.jhu.edu/article/837049.