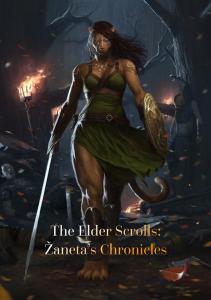 Adrian Lee Zuniga takes readers on a brave journey across a country full of underlying turmoil with “Vvardenfell."

LOS ANGELES, CALIFORNIA, UNITED STATES, January 4, 2022 /EINPresswire.com/ -- Casper, Wyoming-based creative novelist Adrian Lee Zuniga's "Vvardenfell" eludes adventure and incredible artwork into the first installment of his trilogy The Elder Scrolls - Žaneta's Chronicles, available now on Amazon. The novel tells the story of Žaneta, an extraordinarily unique Khajiit living on the island of Vvardenfell, who has an essential part of her life turned upside down when her family is violently attacked. “Vvardenfell" is the trilogy's first novel and creatively introduces The Elder Scrolls - Žaneta's Chronicles, by encompassing a cinematic approach and movie feel to Adrian's writings.

“Vvardenfell” tells the story of Žaneta, with her husband murdered and children missing, traveling across a country full of political turmoil in search of where her loved ones who have been taken. Her magic, skills, and morals are pushed to the limit as she struggles with her core beliefs. Determined to find her children, Žaneta will do whatever it takes, no matter the consequences. Part one of three in the series "The Elder Scrolls - Žaneta’s Chronicles, “Vvardenfell,” is action-packed, full of adventure, and enables readers to experience a world of wonder and magic.

Introducing the first part of this trilogy followed by Part Two: Edge of Oblivion and Part Three: The Lost Mane, Adrian Lee Zuniga's The Elder Scrolls - Žaneta's Chronicles is filled with compelling characters and storylines while emphasizing details such as location, food, and creatures that make the land of Morrowind intriguing and captivating.

"The Elder Scrolls - Žaneta's Chronicles" is available on Amazon, and fans can also purchase the audiobooks through Audible.

About The Author
Adrian Lee Zuniga enrolled in the Marine Corps at 17 in 1998. After being diagnosed with diabetes, he was honorably discharged from the Marines and has been a respiratory therapist, FFL holder, artist, writing fiction and non-fiction since 2006. By 2013 he had a few sparks of inspiration that led him to develop characters for stories he was brainstorming. By the end of 2014, he wrote a rough draft of his first book, The Elder Scrolls Žaneta's Chronicles. With an opportunity to speak to Zenimax/Bethesda Media CEO Robert Altman, Adrian received help tailoring his draft. Afterward, he continued to professionally pursue his endeavors and work with an overseas character artist, heightened his creative mind and developed The Elder Scrolls - Žaneta's Chronicles.