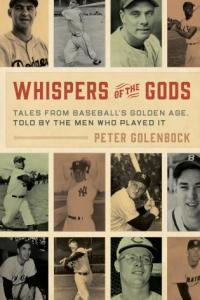 Whispers of the Gods 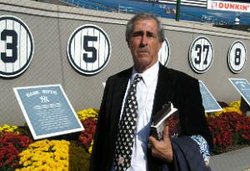 In Whispers of the Gods, bestselling author Peter Golenbock brings to life baseball greats from the 1940s, 1950s, and 1960s through timeless stories told straight from the players themselves. ”
— Rowman & Littlefield
WASHINGTON, DC, USA, January 3, 2022 /EINPresswire.com/ -- During a time of inflated salaries, regular owner lockouts and player scandals, baseball fans often long for an era of classic baseball, full of stories of legends like Maris, Musial, Mantle and more.

And who better than best-selling author and baseball historian Peter Golenbock to bring to us those stories of the glory years of America's favorite pastime.

Peter is responsible for writing some of baseball's most beloved and authoritative books on the storied subject including Dynasty: The New York Yankees, 1949-1964;The Bronx Zoo (with Sparky Lyle); Bums: An Oral History of the Brooklyn Dodgers; Balls (with Graig Nettles); Amazin’: The Miraculous History of New York’s Most Beloved Baseball Team; and Idiot: Beating “The Curse” and Enjoying the Game of Life (with Johnny Damon.

In Whispers of the Gods, 10-time NY-Times bestselling author Peter Golenbock brings to life baseball greats from the 1940s, 1950s, and 1960s through timeless stories told straight from the players themselves.

Like the enduring classic The Glory of Their Times, this book features the reminiscences of baseball legends, pulled from hundreds of hours of taped interviews with the author. Roy Campanella talks about life in the Negro Leagues before coming up to the Brooklyn Dodgers. Ted Williams recounts why he believes Shoeless Joe Jackson belongs in the Hall of Fame. Tom Sturdivant provides vivid memories of Casey Stengel, Mickey Mantle, and other Yankee icons. Other voices include Phil Rizzuto, Jim Bouton, Stan Musial, Roger Maris, and many others.

The players interviewed were All-Stars, Hall of Famers, and heroes to many, and their impact on the national pastime is still seen to this day. Baseball history comes alive through the stories shared in Whispers of the Gods, offering a fascinating account of the golden age of baseball.

The book is published by Rowman & Littlefield and is slated for official release on March 15th, 2022. It is currently available for Amazon Pre-order.