An Inspiring Story About Championing at Life 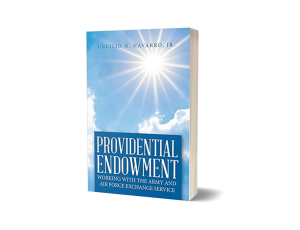 YORBA LINDA, CALIFORNIA, UNITED STATES OF AMERICA, June 14, 2022 /EINPresswire.com/ -- When we have big shoes to fill, many of us feel overwhelmed with life’s uncertainties. When pressure kicks in, we often lose sight of our ultimate goal. But do you know that everybody is providentially chosen for a special destiny? And when you start believing it, you will surely make it through.

That is what rising Author Cecilio Navarro Jr firmly believes. All his life lessons about the humps of life along with its sweet successes are written in a book filled with Navarro’s inspiring stories in “Providential Endowment: Working With the Army and Air Force Exchange Service”.

Navarro’s father, who only obtained a six-grade education, managed to become a schoolteacher and Post Exchange manager at Clark Air Force Base.

After his father died, he drew on his faith and landed a job at the Army and Air Force Exchange Service, which is a retailer located on bases worldwide. He spent thirty-nine years at the Exchange, representing employees who faced termination and even running for union president.

Navarro was one of the first Philippines Exchange employees to receive special immigrant status to come to the United States because of his exemplary work. While he had to feed a family of four on $4.25 an hour, he stayed upbeat for success.

“I gained confidence for my journey from the passage in the book of Genesis 1:26 that proves that humans are made in the image of God, and we should recognize the special qualities of human nature that allow God to be made evident in humans,” says Navarro.

Join the author as he shares his amazing journey through life’s extremes from the Philippines to the United States to Germany.

“Providential Endowment: Working With the Army and Air Force Exchange Service” is now available on Amazon and other digital bookstores worldwide.

Launching brilliant stars into the spotlight! Inks & Bindings is set to broaden horizons, revamp to perfection, and produce a masterpiece through the power of books.

Inks and Bindings is a premier self-publishing company located at the heart of the Golden State. Aptly based where fashion, entertainment, and culture thrive, the team goes all out in bringing independent authors into the sweet California spotlight.