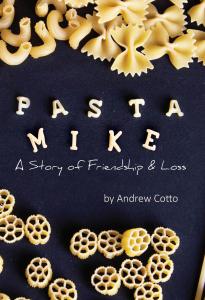 The visceral impact of Pasta Mike (Black Rose Writing / January 20, 2022) - delivered in prose both humorous and searing - is Cotto’s stunningly honest assessment of the power of male friendship and the devastating emotional impact borne out of its loss.

BROOKLYN, NEW YORK, USA, December 8, 2021 /EINPresswire.com/ -- In many ways, Andrew Cotto’s new book, PASTA MIKE, is a culmination of his six previously published novels. In Pasta Mike, the award-winning author focuses writ-large on his recurring themes of identity, friendship and family, often informed by his passion for Italian cuisine and cooking.

The visceral impact of Pasta Mike (Black Rose Writing / January 20, 2022) - delivered in prose both humorous and searing - is Cotto’s stunningly honest assessment of the power of male friendship and the devastating emotional impact borne out of its loss.

Pasta Mike tells the story of Mike O’Shea and Andy Cotto, 70’s kids born days apart on the same block in New York City, baptized in the same water, and who were inseparable growing up and into adulthood. After celebrating their 40th birthdays together, Mike falls ill and dies shortly thereafter. The impact on Andy is enormous, and he spirals into a depression that threatens everything he holds dear.

“The story is very biographical, so I can attest to the narrative personally,” says Cotto, who decided to write the book as a novel to protect the privacy of his lost friend and his family. “The two main characters of Andy and Mike are very much me and my friend Mike. I am true to the contours of our lifelong friendship and the immense value of it in our lives. I am also, painfully, true to what it felt like when that friendship was no longer present as I was committed to tackling men and mental health. There is also a food component and not so in a superfluous way: Food serves as a trigger for the character of Andy’s recovery as it was such an important part of the friendship (hence the title). There is also a 9/11 component as ‘Mike’ was a fireman on 9/11 who died subsequently from an illness acquired as a result. It was important for me to include this aspect since firefighters, in particular, understand both the power of male bonds and the reality of loss.”

Cotto credits the rituals of preparing his (and his friend’s) favorite Italian foods, which proved to be a healing balm. Cotto is a highly regarded cook and Italophile who has made numerous appearances on local TV (see him on Good Day New York) and has written extensively about his passion for Italian food in both his journalism and fiction. His most recent novel is a culinary journey through Italy titled Cucina Romana, which is the second helping in his food-filled, wine-soaked “Italian Adventure” series.

Andrew Cotto is available for interviews in January and February 2022 - virtual or in-person - especially with outlets that would like to explore men’s mental health issues and how difficult it is for men to deal with personal loss in our culture, as well as those interested in the role of food in our lives as a source of wellness and healing.

An advance copy of Pasta Mike in PDF is available upon request.

Cotto is an active journalist and regular contributor to the New York Times. He also has published articles in Parade, Men's Journal, Rolling Stone, La Cucina Italiana, AARP, Rachael Ray in Season, Maxim, Italy Magazine, The Huffington Post, the Good Men Project, Salon and Conde Nast Traveler. He has an MFA in Creative Writing from The New School. He lives in Brooklyn, NY.

For more information or to set up an interview with Andrew Cotto, please contact me directly at scottb@thebusbygroup.com or text or call 310.600.7645.