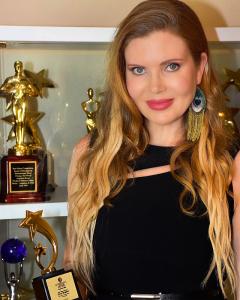 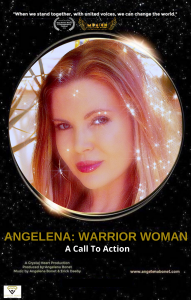 When I began Change The World I had no idea I would create a tetralogy feature film series. To be an ambassador for women and an example of rising above such adversity is a legacy I'm very proud of!”
— Angelena Bonet
SYDNEY, NEW SOUTH WALES, AUSTRALIA, February 21, 2022 /EINPresswire.com/ -- Australian filmmaker, Angelena Bonet, has just been announced as an Official Selection at the 2022 Bare Bones International Music & Film Festival for her latest documentary feature film "Angelena: Warrior Woman". This film is her fourth instalment of her feature film tetralogy and the fourth year Angelena has been a part of this film festival. She has previously won for her short documentary "Change The World", the other two films from the trilogy and music videos for "Change The World" and "Break The Chain", which feature in the films. She attended the festival back in April 2018 before the "Angelena: Change The World" world premiere in Toronto during Hot Docs. She was the recipient of the 'Domestic Violence Prevention Network Salute Award' in 2020 but due to the global pandemic and international flight cancellations from Australia, Angelena was unable to attend the event in person.

Her documentaries chronicle her life to the present day and humanitarian work, which she has produced, directed and edited in their entirety. Her soulmate and fiancé of three days, Erick Deeby, suddenly and unexpectedly passed away in August 2007. He had written and recorded instrumental pieces of music for her between 2005 and 2007. Bonet then wrote the lyrics and melody to his music after his devastating death and during her time of deepest grief. Then on May 26, 2012, she was a victim of a violent attack and was kidnapped and gang-raped but miraculously survived the attempted murder in Melbourne, Australia. Suffering Post Traumatic Stress Disorder (PTSD) as a consequence of the heinous crime, orchestrated by someone that she knew and trusted, she is now ready to share her story. The music she co-wrote with Deeby has become the soundtrack for her films and also won numerous 'Best Original Soundtrack' awards worldwide.

Now ready to share her story, Angelena, recently released her short film "Change The World" on YouTube to make it available to everyone for free. She realises that many women and girls who could benefit from her voice and transparency may be at a financial disadvantage and wants to inspire them. Domestic violence has risen substantially since the Covid-19 global pandemic began and many victims are in lockdown with their abusers. Angelena hopes to reach those women and give them hope and assure them there is light at the end of the tunnel and they are not definitely not alone.

Bare Bones International Film & Music Festival is dedicated to screening feature motion picture projects with budgets less than one million dollars. Their philosophy is to promote and support the efforts of the small budget filmmakers and producers. They treat everyone the way they would like to be treated and provide lots of encouragement. The festival is a Spring break and networking opportunity for actors, writers, filmmakers and producers. The small town experience will give visitors a break from the hustle and bustle of a big city. In the city of Muskogee, Oklahoma, USA, everyone greets you with a smile and a friendly "howdy'!