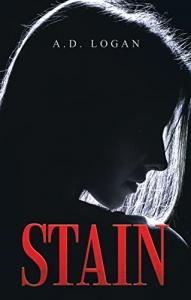 An exciting tale of witchcraft, suspense, and thriller that’s making a killing with the readers.

NEW YORK, NEW YORK, UNITED STATES, June 22, 2022 /EINPresswire.com/ -- A.D. Logan makes his debut with 'Stain,' a mystery-thriller novel about the life of Carolyn, an innocent woman who is now a demonic creature. The story of Carolyn is that of an ordinary girl, living a normal life except that she was bullied and wronged by many till she met her soulmate. When they move to a new house, a series of events lead up to the recent story where 12 individuals are trapped inside the house, and Carolyn decides to take vengeance upon them unless they confess their sins. Whether all the gruesome killings are justified to avenge what happened to her is a question worth exploring. The story is thrilling, exciting, and part 1 of an entire series.

The story isn't just about hacking and slashing or killing blindly. It's about vengeance and revenge, but to what extent is worth exploring. The novel is a great attraction to those who love mystery, thriller, gore, suspense, and supernatural. Stain is not just a book where fantasies are mere words but the realization of dark imaginations.

Logan is currently working on a sequel which will soon be coming out.

Born and raised in Jacksonville, North Carolina, A.D has spent most of his life serving in the U.S. Armed forces, where he has experienced many facets of life, something that bleeds in his career as a writer. When he isn’t working, he is writing. And he writes about many things: love, the inner workings of his mind, and the terror and beauty of the world he sees. He draws inspiration from his long and solitary life in the military, from all his energies, from strangers on the road, and his family. His hobbies range from reading to personal growth and from relaxing with his friends to pondering about the paradoxes of life. He writes almost every day on the numerous subjects that interest him, be it personal, political, or the in-betweens. Through the love and support of his family and friends guiding him, he has come to see the shining light at the end of the road that tells him that he is supposed to write. Not for himself but for everyone around him. And he follows.