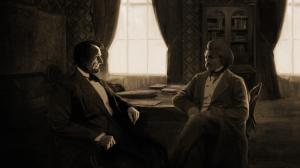 LOS ANGELES, CA, UNITED STATES, February 4, 2022 /EINPresswire.com/ -- Apple TV+ released the trailer for the new four-part documentary series “Lincoln’s Dilemma,” a 21st-century examination of a complicated man in the context of his times. With never-before-heard stories about Lincoln, as well as close-up perspectives of him as a man, the docuseries shines a light on a side of Lincoln rarely seen – and provides a fresh perspective on a story that feels more timely and relevant than ever when explored alongside the events that Americans are living through today. Narrated by Jeffrey Wright and features the voices of Bill Camp as Abraham Lincoln and Leslie Odom, Jr. as Frederick Douglass, all four parts of “Lincoln’s Dilemma” will premiere globally on Friday, February 18 on Apple TV+.

Based on acclaimed historian David S. Reynolds’ award-winning book, “Abe: Abraham Lincoln in His Times,” the series features insights from a diverse range of journalists, educators and Lincoln scholars, as well as rare archival materials that offer a more nuanced look into the man dubbed the Great Emancipator. Set against the background of the Civil War, “Lincoln’s Dilemma” also gives voice to the narratives of enslaved people, shaping a more complete view of an America divided over issues including economy, race and humanity, and underscoring Lincoln’s battle to save the country, no matter the cost.

Apple TV+ is home to award-winning Apple Originals from today’s most imaginative storytellers. Apple TV+ offers premium, compelling drama and comedy series, feature films, groundbreaking documentaries, and kids and family entertainment, and is available to watch across all your favorite screens. After its launch on November 1, 2019, Apple TV+ became the first all-original streaming service to launch around the world, and has premiered more original hits and received more award recognitions faster than any other streaming service. Apple Original films, documentaries and series have been honored with 202 wins and 918 awards nominations in less than two years.

Apple TV+
Apple TV+ is available on the Apple TV app in over 100 countries and regions, on over 1 billion screens, including iPhone, iPad, Apple TV, Mac, popular smart TVs from Samsung, LG, Sony, VIZIO, TCL, and others, Roku and Amazon Fire TV devices, Chromecast with Google TV, PlayStation and Xbox gaming consoles, and at tv.apple.com, for $4.99 per month with a seven-day free trial. For a limited time, customers who purchase and activate a new iPhone, iPad, Apple TV, Mac, or iPod touch can enjoy three months of Apple TV+ for free. For more information, visit apple.com/tvpr and see the full list of supported devices.