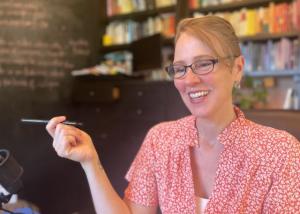 I see The Scribbling Buddha as a lighthearted aggregation of resources for busy writers looking to write more and suffer less.”
— April Dávila

LOS ANGELES, CA, UNITED STATES, June 14, 2022 /EINPresswire.com/ -- The Scribbling Buddha newsletter is compiled every week by novelist and meditation instructor April Dávila, who started it to share the resources that inspire her in her writing life. Much of the content is about books, writing, and mindfulness, but she reserves the right to share just about anything that grabs her interest. Above all, Dávila sees it as a space to be playful with words.

“I see The Scribbling Buddha as a lighthearted aggregation of resources for busy writers looking to write more and suffer less,” explains Dávila. “In fact, that’s its tagline—Write More, Suffer Less. Each week, it offers a bulleted list of eight great resources for writers, including instruction on craft, tips for a balanced lifestyle, inspirational quotes, ‘nerd words’ (obscure words defined - because writers should always be expanding their vocabularies), and more.”

The newsletter goes out through Substack every Friday morning and is roughly a two-minute read. As for its origin story, Dávila says, “I've been blogging at aprildavila.com since 2010 (and have been recognized by Writer's Digest as one of the Best 101 Websites for Writers: https://aprildavila.com/april-davila-bio/about-this-blog/), but I wanted a platform that wasn't tied to my own content. I do sometimes link to my own posts in the newsletter, but mostly I link to the other writers and resources that are inspiring me. It gives readers a peek behind the curtain of my writing life at the things I'm thinking about, the things that ultimately get processed through my brain and end up on the page or on my blog.”

But most of all, according to Dávila, “I want the Scribbling Buddha newsletter to be a fun weekly update that people are excited to see in their inbox on Fridays, something that inspires and entertains.”

April Dávila received her undergraduate degree in biology from Scripps College before going on to study writing at USC. She is a mindfulness meditation instructor (certified by the Greater Good Science Center at the University of California at Berkeley) and co-founder of A Very Important Meeting. In 2019 her short story “Ultra” was nominated for a Pushcart Prize. Dávila's novel "142 Ostriches" won the WILLA Award for Women Writing the West. Publisher's Weekly called it a "vivid, uplifting debut." A fourth-generation Californian, she lives in La Cañada Flintridge with her husband and two children. She is a practicing Buddhist, half-hearted gardener, and occasional runner.