Arbitrary Lines: How Zoning Broke the American City and How to Fix It 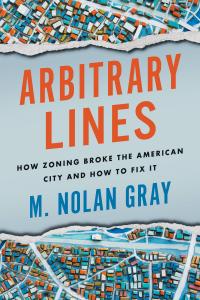 In "Arbitrary Lines", Nolan Gray argues that it's time to abolish zoning. He shows how to better manage urban growth and create more livable, equitable cities.

A welcome manifesto for rethought urban spaces and their outliers, bringing social justice into the discussion.”
— Kirkus
WASHINGTON, DC, UNITED STATES, June 22, 2022 /EINPresswire.com/ -- Zoning. It determines where a person can live, and just as importantly, where they can’t. It frequently makes corner grocery stores illegal and public transit infeasible. And it’s one of the most successful segregation methods ever devised in the U.S. From its humble origins as a way to delineate land uses and regulate densities, zoning has become a set of impossibly detailed parameters that divide up cities among arbitrary lines, controlling nearly every aspect of daily life and stifling innovation.

In "Arbitrary Lines: How Zoning Broke the American City and How to Fix It" (Publication Date: June 21, 2022), city planner M. Nolan Gray argues that it is time to abolish zoning. He details steps to better manage urban growth and create more affordable, equitable, and sustainable cities. Gray shows how zoning often has little to do with city planning and has failed to address even basic concerns over how cities regulate growth.

Using engaging stories and explanations, Gray lays the groundwork for eliminating zoning by defining what zoning is (and what it isn’t), how it works, and common myths about how cities manage urban growth. He addresses contemporary critiques of zoning, exploring how it has limited new housing supply, created an affordability crisis, mandated sprawl, and segregated American cities. Many American cities still have blatantly segregationist zoning codes, pushing their most vulnerable residents into the most undesirable areas.

But reform is in the air: Gray details how cities from Minneapolis to Fayetteville are scrapping apartment bans, dropping minimum lot sizes, and eliminating minimum parking requirements. However, Gray argues, reforms can only do so much to fix a fundamentally broken policy. He makes the case for completely abolishing zoning and charts out how planning tools could be more effective in the post-zoning American city.

Donald Shoup, Distinguished Research Professor, Department of Urban Planning, University of California, Los Angeles and author of "The High Cost of Free Parking" writes, "Nolan Gray has the insights of Jane Jacobs and the prose style of Mark Twain. In his aptly-titled new book, 'Arbitrary Lines', Gray argues that zoning in America is a disease masquerading as a cure. He also proposes a post-zoning style of planning for fair, sustainable, and livable cities."

As zoning approaches its 100th anniversary, it’s time reevaluate a failed policy with deep roots in classism and racism. "Arbitrary Lines" argues for a new path forward and shows how moving past zoning is a critical step towards creating more vibrant, equitable, and prosperous cities.

M. Nolan Gray is a professional city planner and an expert in urban land-use regulation. He is currently completing a Ph.D. in urban planning at the University of California, Los Angeles. Gray previously worked on the front lines of zoning as a planner in New York City. He now serves as an Affiliated Scholar with the Mercatus Center at George Mason University, where he advises state and local policymakers on land-use policy. Gray is a contributor to "Market Urbanism" and a widely published author, with work appearing in outlets such as "The Atlantic", "Bloomberg Citylab", and "The Guardian". He lives in Los Angeles, California and is originally from Lexington, Kentucky.

Founded in 1984, Island Press works to stimulate, shape, and communicate the information that is essential for solving environmental problems. Today, with more than 1,000 titles in print and some 30 new releases each year, it is the nation’s leading publisher of books on environmental issues. Island Press is driving change by moving ideas from the printed page to public discourse and practice. Island Press’s emphasis is, and will continue to be, on transforming objective information into understanding and action. For more information and further updates be sure to visit www.islandpress.org.
###