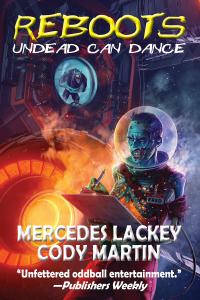 Mercedes Lackey was named the 38th Grand Master by the Science Fiction & Fantasy Writers of America. Reboots is being released on December 14th by Arc Manor.

This highly coveted designation is the highest honor SFWA bestows on an author for their body of work in the genre. Previously announced Grand Masters include Robert A. Heinlein, Ursula K. Le Guin, Isaac Asimov, and Arthur C. Clarke.

Ms. Lackey’s body of work includes the extremely popular Velgarth series, with stories set around the fictional country of Valdemar. She has also collaborated with several authors, including her husband Larry Dixon and friend Cody Martin.

In partnership with her co-author Mr. Martin, Ms. Lackey created the fascinating universe of Reboots for Arc Manor for the Stellar Guild program. This quirky universe includes all sorts of creatures, like werewolves and zombies, living side-by-side with humans. Just like humans, they are dealing with real-world problems, such as jobs, relationships, and all their insecurities and anxieties. The original works have now been expanded into the episodic novel REBOOTS: UNDEAD CAN DANCE.

This “unfettered oddball entertainment” (Publishers Weekly) is full of fascinatingly quirky characters like Fred the Werewolf; Skinny Jim, who conceals his ability to speak to avoid being exterminated; and Humph the Boggart, an ethereal parahuman private investigator who navigates interspecies relationships in claustrophobic extraterrestrial environments.

Ms. Lackey and Mr. Martin have created a perfect, witty, fast-paced read that the reader will not be able to put down until the last page—and then will crave more.

CAEZIK SF & Fantasy (an imprint of Arc Manor) is publishing the eBook version of Reboots: Undead Can Dance on November 30, with the hardcover being released on December 14, just in time for Christmas.

An excerpt of the book (the self-contained first part) can be downloaded by clicking on the following URL: