As Eating Disorder Cases Rise, One Man Shares His Journey with Orthorexia 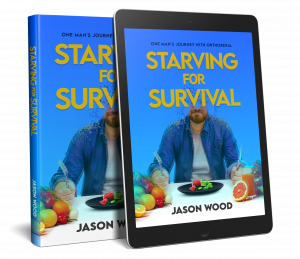 Did you know men battle eating disorders, too?

Jason Wood reveals how healthy eating and fad dieting can go from well-meaning improvements to knocking on death's door. Following a health scare at twenty-nine, Jason turned to “clean eating” as his coping solution to the sudden loss of his parents, living in a run-down apartment, and broken family relationships. In his memoir, to be released January 11, 2022, Jason illustrates the physical, mental, and social effects of orthorexia for men who may have been there, or for readers who suspect someone they love is struggling.

“Jason courageously shares his story and gives a voice to the millions of boys and men who suffer alone, in silence,” says Dr. Paula Quatromoni, Department Chair of Health Sciences at Boston University.

Jason launched his blog Orthorexia Bites in February 2021 with a mission to advance the conversation regarding men’s mental health and the stigma that still exists today. Through numerous podcast appearances, speaking engagements, and his upcoming memoir, Jason is starting an important conversation that encourages everyone--especially men-- on how important it is to speak up and get the help they deserve.