AUTHOR EXPLORES WHAT IT MEANS TO BE AMERICAN 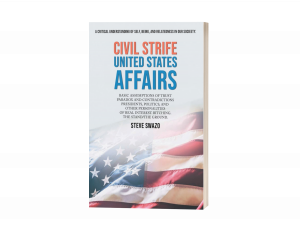 Using scholarly texts, historical news, and various Americana, author pieces together a picture of life under the American flag

ETOBICOKE, ONTARIO, CANADA, June 10, 2022 /EINPresswire.com/ -- Fewer identities have been so sure and hard to pin down as the American national identity. For those viewing from foreign lenses, being American is a thing to envy or deride. For those who live on American soil, it’s an ever shifting thing that is both exciting and exasperating. But what really does it mean to be American? Author Steven Swazo attempts to shed light on this question in his expansive book, "Civil Strife: United States Affairs:"

At a relatively lean 374 pages, Swazo burns through academic papers, history books, the American Constitution, news articles, and public records to paint a picture of social life in the United States of America. The book is divided into five chapters, covering such matters as American values, the aftermath of the Panic of 1893, the two World Wars, the Cold War, US expansionism, the economic boom of the 1980s, and much more. It’ll help you appreciate just how far the United States has come in the past century or so, especially in the realm of sociocultural and global relations.

It’s an exhaustive book for a seemingly evasive question, and by the end of it, Swazo will have you wondering what it truly means to be American. Civil Strife was presented at the London Book Fair, held at the Olympia London in London, UK, from April 5 to 7, 2022, as part of the New Title Showcase.

Bookside Press is all about creating buzz in the digital world. Buzz that'll have each vital message be heard loud and clear. Headquartered in Canada, this hybrid publishing and advertising company aims to share the magic of its authors' books with the world. With a dedicated team of creatives and marketing professionals, Bookside Press collaborates with clients in building better brands that stand out and reach greater heights