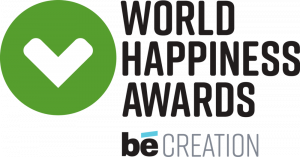 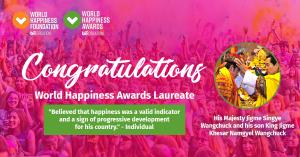 There are incredible public policy developments happening at all levels of governance and we want to say thank you.

Systemic change happens through Public Policy as it can determine social happiness and well-being for long periods of time. ”
— Luis Gallardo, Founder & President - World Happiness Foundation
NEW YORK, NEW YORK, UNITED STATES, December 22, 2021 /EINPresswire.com/ -- Both the Kings His Majesty Jigme Singye Wangchuck and his son His Majesty Jigme Khesar Namgyel Wangchuck are the inspiration for the present times and times to come. We are blessed and delighted to honor them as World Happiness Awards 2021 Laureates in Policy Making.

Join us in our celebration of people and communities, making this planet a better place for all!

When a young Crown Prince running at 17 years of age became the King of Bhutan in 1972, one of His Majesty Jigme Singye Wangchuck’s first and ever-lasting initiatives to bring happiness and wellbeing to his citizens was through the principles of Gross National Happiness, which he propounded was more important than Gross National Product. This concept questioned the conventional economic measurement system that GDP alone could not bring happiness and well-being to citizens.

Although still a teenage monarch, His Majesty was wise beyond his years. He firmly believed that happiness was a valid indicator and a sign of progressive development for his country. He also believed in the legitimacy of public participation in defining Bhutan’s development goals. He brought the nation to a democracy without making the citizens realize it.

The concept re-counts Bhutan’s ancient legal code of 1629 given by Zhabdrung whose embodiment is His Majesty Jigme Singye Wangchuck that states ‘if the government cannot create happiness for its people, then there is no purpose for that government to exist.’ The code notes that Bhutanese laws must promote happiness for all sentient beings. For the King, the focus was never just the economic progress of his country but creating a flourishing human society living in harmony with its environment.

Today, plentiful research shows that wealth alone doesn’t contribute to happiness and life satisfaction. The Gross National Happiness index measures the quality of its development holistically, believing that the positive development of human society happens when material and spiritual growth occurs alongside each other. That is why this small Himalayan country is considered a living example of sparking the debate on human development.

Four decades later, Bhutan, now a democratic country, still ensures the inclusion and continuity of GNH values as enshrined in its Constitution of the Kingdom of Bhutan. As a public policy, the GNH development framework is supported by four pillars:

An overarching objective within these pillars is eradicating poverty without any compromise with nature.

Acclaimed as ‘the people’s king,’ His Majesty Jigme Khesar Namgyel Wangchuck has already won over hearts worldwide. He is a gentle, compassionate, and kind monarch who expanded a royal welfare system that helps the rural poor.

He started his reign with the democratization of his country. He traveled and continues to visit all parts of the country mainly on foot, talking to people from all walks of life understanding their problems, and helping them through his government to come out with measures and policies to overcome their issues. He is engaged with young people about the importance of higher standards in education, business, and servicing. He signed the abolishment of anti-homosexuality laws and launched the National Cadastral Resurvey to resolve issues of excess land. He also established the Rehabilitation Project, which focuses on improving the lives of people who live in remote or difficult areas.

According to the King His Majesty Jigme Khesar Namgyel Wangchuck, every generation must interpret GNH in their own way because of the changes of time and environment that they would live in. He believes that a vibrant economy propelled by the right kind of technology and educated civilization is the very foundation on which national happiness can be built.