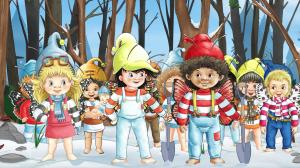 CAMBRIDGE, CAMBRIDGESHIRE, UNITED KINGDOM, December 22, 2021 /EINPresswire.com/ -- After bringing the world the biggest EUROVISION winning song of all time, Brotherhood of Man perform on the heartfelt and musical Christmas special The Butterfly Children.

The special is an all-new animated Christmas cartoon aimed at pre-schoolers, entitled ‘What Would Happen if Christmas Never Came?’. The 33-minute special debuted 20/12/21.

The project gives new life to Pat and Angela Mills’ beloved children’s literature series of the same name. Having sold more than 2 million copies worldwide, the series captured the imagination of children everywhere and is now primed for a stellar comeback with all new stories penned by Martin Lee across books and animation.

The show is soundtracked by music legends Brotherhood of Man who have recorded 21 all new songs with beautiful new orchestration for the children’s series, with the lead vocals of the title song What Would Happen if Christmas Never Came sung by band member Sandra Stevens.

The series takes viewers on a journey “deep in the woods where people seldom go” to the home of The Butterfly Children – a host of lovable and charming characters from across the globe who care most about looking after each other and the planet. But also, in the woods lurk The Moth Gang – a dirty, smelly, and scruffy folk led by the nefarious Skullhawk who looks to thwart The Butterfly Children’s good and kind way of life.

The Butterfly Children Christmas Special is based on the spellbinding visuals by former Disney artist Angela Kincaid and celebrated comic book writer and illustrator Patrick Mills, best known for creating 2000 AD and his heavy involvement in the development of Judge Dredd.

Brotherhood of Man stunned with their 1976 Eurovision winning single Save Your Kisses for Me which sold in excess of 5 million units worldwide, achieving No. 1 in many countries and becoming the best-selling song of the year in the UK. Martin Lee followed this success by co-writing two further number one singles Angelo and Figaro together with multiple top ten hits and albums.

Martin teamed up with producer PVK to bring What Would Happen if Christmas Never Came to life. With music and comic book royalty behind the project, delightfully charming sensibilities, and a wonderous story to match, the Christmas special is a celebrated return for the series and a must watch for music fans and children everywhere.