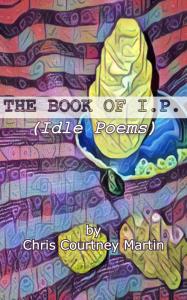 THE BOOK OF I.P. is described as “ironic in concept, sincere in content” as it deconstructs prescribed best-practices for getting ideas greenlit as a screenwriter, and what it means to possess a producible story.

Each work in the collection represents an "ode" to story concepts Martin finds screen-worthy. Most of these concepts are wholly original, while a couple poems hint at some unorthodox reboots on the writer's "wishlist."

"THE BOOK OF I.P. (IDLE POEMS) by Chris Courtney Martin has an ample tone of sovereignty while indicating the true face of societal vindication, the gap between this generation and the last one. The similes, personifications, and metaphors used in the making of the poems are very assertive, bold, and courageous."

"That sensation you feel is the rumbling and thumping, the shouts and shade of Chris Courtney Martin’s The Book of I.P. (Idle Poems), a collection of verse and essays that glories indefatigably in its one-finger salute to all that stands in the way of survival. Read and revel; Martin is a master."

The 65-page work, which contains 30 poems and 2 memoir-style essays, is available on Amazon print-on-demand via independent publisher Alien Buddha Press.

Chris Courtney Martin is a Black Non-Binary/Queer writer-producer originally from Philadelphia, PA. In 2019, Martin co-hosted Best Sellers Production’s “AFRO HORROR” podcast in its inaugural season alongside creator Sade Sellers. Martin’s short Horror work has also appeared on the animated YouTube series “SOMETHING SCARY” created by Sapphire Sandalo and hosted by Markeia McCarty. They have garnered a laundry-list of accolades such as Grand Prize for Best Screenplay at Urbanworld Film Festival, recognition from the Tribeca Film Institute, spots on the Young & Hungry and Bitch Lists, plus the International Screenwriters Association’s Top 25 Screenwriters to Watch in 2019 and Development Slate.

The book is now available for purchase. To read a selection of poems from THE BOOK OF I.P., visit the publisher’s website.