Course Correction, the First Book in the Phenomenal Sci-Fi Series is Set to Re-release on June 28 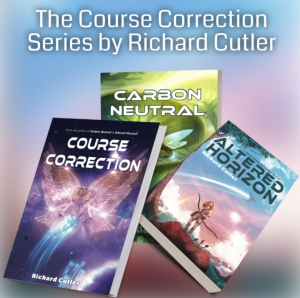 Fans now have an opportunity to see how it all started...

I was completely drawn in while reading this book ... As is incumbent for a science fiction novel, there is a masterful balance between the scientific details and the creative storyline.”
— Mackenzie Wells, University of Georgia

PLYMOUTH, MA, UNITED STATES, June 17, 2022 /EINPresswire.com/ -- Briley & Baxter Publications is pleased to announce the re-release of Course Correction, the prequel to the popular science-fiction series including Carbon Neutral and Altered Horizon from author and engineer Richard Cutler. It is available for preorder on Amazon and Barnes & Noble and will be released on June 28.

The year is 2085, and a fleet of interstellar ships hurtles toward a solar system that is hoped will offer a new home for humanity. Setting up a wormhole gate on one of Epsilon Eridani’s planets would provide an escape for the billions left on an overpopulated and resource-poor Earth. The fleet receives what is assumed to be its last communication from the United Nations Stellar Commission. The brief message reads, “You’re on your own,” which the fleet takes to mean that they just passed out of Earth’s communication range.

But they are wrong.

Back home, a disaster unparalleled in Earth’s history now threatens humanity’s very survival. The population is in free fall, governments have collapsed, and an overwhelming sense of apathy grips the planet. Unless the situation improves-and soon-the wormhole gate will open to an Earth without humans. Humanity’s hopes are now fully in the hands of the ninety thousand star-flung individuals heading through deep space on fragile ships-while back on Earth, a powerful force awakens.

Humanity has leaped into the stars, but will this be our future-or a last desperate act before extinction?

“I was completely drawn in while reading this book. It is written with an extensive level of expertise, so much so, that it is very easy to believe the realism of the details. As is incumbent for a science fiction novel, there is a masterful balance between the scientific details and the creative storyline.” – Mackenzie Wells, University of Georgia

About the Author:
Richard Cutler is an engineer who combines historical events with future possibilities which led to the creation of worlds in his other two books, Carbon Neutral and Altered Horizon. When Richard isn’t writing, he restores early 1900s automobiles, and goes cruising with his wife, Gini, and their cat, Maggie. Richard lives in a small town in Massachusetts, close to the ocean.

Richard Cutler is available for interviews.