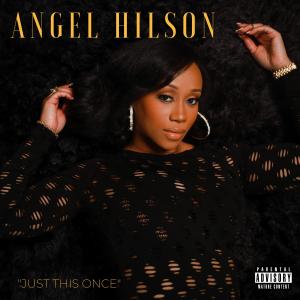 She’s Got a Way with Words. Her Novels, Screenplays, and Songs Speak Volumes to Her Non-Stop Creativity.

LOS ANGELES, CALIFORNIA, UNITED STATES, February 11, 2022 /EINPresswire.com/ -- ANGEL HILSON, also known online as Angel the Author, presents a new single, just in time for Valentine’s Day weekend. Working with Grammy-nominated, multiplatinum producer Jbeatzz and Grammy-winning Master Engineer Kenny Mixx, Angel found the perfect partners to make this song stand out from the crowd. Released under Rogue Music & Entertainment, “Just This Once” is a sexy new track warning her love interest that she plays for keeps. Lines such as, “I’m telling you now, I’m not gonna stop, I’m dropping it down, hard,” lead one’s imagination on a journey.

Her way with words has led to nearly 2 million reads on her first novel, Electric Impulse: Love, Life & Sex. And has afforded her the opportunity to write book two in the series, Electric Impulse: A Bond Unbreakable. But it doesn’t stop there. She recently wrote a short screenplay, “Vinyl Taped Mary Jane,” that’s making the rounds on the film festival circuit. It’s been tapped as an Official Selection of New Media Film Festival, a festival that’s been running for the past 13 years and includes judges from such networks as Netflix, HBO, and Warner Brothers. “I’m excited for what’s next,” she says. Her goal is to go where the writing takes her.

Right now, that happens to be across all major streaming platforms, with her latest single, “Just This Once.” Find it today on your favorite streaming platform. Follow her online at Wattpad, Instagram, and TikTok @AngeltheAuthor320.

About ANGEL HILSON
Angel is an artist in the truest sense of the word, focusing her talents on writing and singing. She is the author of the Electric Impulse series, which has been acquired by Wattpad, a social reading community with over 90 million monthly users. She also writes screenplays and creates content online. If writing is her passion, then singing is her first love. She’s been singing since she was 5, holding informal competitions against her talented cousins. The day she was finally deemed the best singer of the trio, she knew music would always be an integral part of her life. Listening to artists such as Whitney Houston, Lauryn Hill, and Aaliyah inspired her to become the singer she is today, sultry with a hint of pop, authentic in her lyrics, and sleek in style.