Dave Nassaney Speaks at the London Stock Exchange with Nigel Farage (of BREXIT Fame) during his 2021 Book/Speaking Tour. 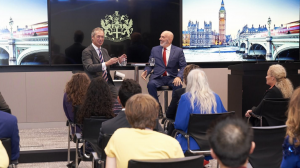 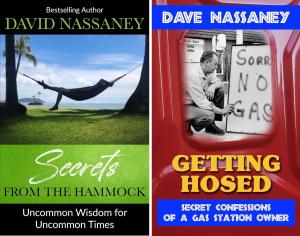 Soon to be Released and Newly Released Books 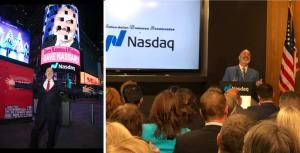 Dave at NAZDAQ on Jumbotron in Times Square

Best-selling author, Dave Nassaney is getting ready to launch his fourth book, "Secrets From the Hammock, Uncommon Wisdom for Uncommon Times," February, 2022.

LONDON, ENGLAND, UK, December 13, 2021 /EINPresswire.com/ -- Despite the many Covid-19 challenges during 2021, Dave Nassaney still managed to safely attend several events promoting his new soon to be released book, "Secrets from the Hammock, Uncommon Wisdom for Uncommon Times." He spoke in many parts of the country (and even the London Stock Exchange with BREXIT leader, Sir Nigel Farage). He also visited New York City where he spoke at Times Square in front of his giant image on the NAZDAQ Jumbotron. While in New York, he was interviewed on the iconic WABC Radio station and also spoke at the New York Academy of Medicine.

Dave also relaunched another book he wrote, "Getting Hosed, Secret Confessions of a Gas Station Owner," and acquired the domain, GasolineExpert.com. He appeared on 16 network TV morning shows on ABC, NBC, CBS & FOX giving tips on how motorists can save money at the gas pump in the midst of rising fuel prices. Over the past 45-years, Dave has owned 6 gas stations. He's been at his current location in Castaic Lake, Ca. since 1979, and suddenly became his wife's caregiver (Charlene) in 1996 when she suffered a massive stroke that left her severely speech impaired and paralyzed on one side.

In the last 4 years, despite his caregiving and gas station responsibilities, Dave has appeared on 51 network TV morning shows from Hawaii to Washington, DC, He's a best-selling author, hosts his # 1 rated "Caregiver Dave" podcast and syndicated radio show, has a movie that's being made about his life as we speak, and has spoken at the following venues:

Dave's 4th book, "Secrets From the Hammock, Uncommon Wisdom for Uncommon Times", is scheduled to be released in February, 2022. It is a practical book of wisdom from Dave's life-experiences to help others handle their life's problems and challenges. He has 50 years of counseling and coaching experience along with unusually gifted discernment and intuition for solving problems.

His website, CaregiverDave.com is a place where caregivers can the get help and support they need (30% of them die before their loved ones do from the stress). It is packed with hundreds of his blogs, videos, resources and podcasts from his # 1 syndicated "Caregiver Dave Radio Show", as well as his best-selling books. His other website, GasolineExpert.com, is a place for motorists to learn about how they can save money at the gas pump in the midst of rising fuel prices. Dave is always available for interviews and speaking engagements.

Dave's future goals and aspirations are:
To change the world for caregivers; For the film being made about his life to win the Sundance Film Festival Award; To speak at the White House and Congress; For his new book to become a New York Times Best-seller; and to help caregivers stay alive and stay out of the hospital so they cannot just survive caregiving, but to THRIVE!