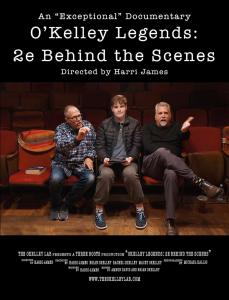 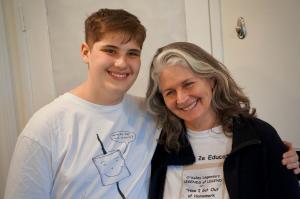 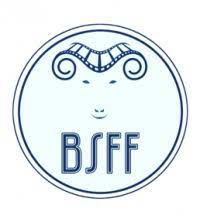 “O’Kelley Legends 2e Behind the Scenes” provides an authentic and educational look at the creative process of putting on a live theatrical performance told through the eyes of autistic teen director”
— Erik Linthorst, Director “Autism Goes to College”

LOS ANGELES, CALIFORNIA, UNITED STATES, November 29, 2021 /EINPresswire.com/ -- “O'Kelley Legends: 2e Behind the Scenes” follows 13-year old Jordan O’Kelley who was diagnosed with autism spectrum disorder at age 4 and identified as gifted at age 10. Jordan is “twice exceptional” or “2e”— gifted and having a disability or learning difference.

In the 4th grade, Jordan wrote a book of humorous stories about his family, called “O’Kelley Legendary Legends of Legend, or “How I Got Out of Homework in 4th Grade.”

As an 8th grader, Jordan adapted his book into a monologue show as a fundraiser to benefit the nonprofit organization, SENG (Supporting Emotional Needs of the Gifted). SENG empowers families and communities to guide gifted and talented individuals to reach their goals.

The late Dr. James T. Webb founded SENG to offer the gifted community support and guidance through education, research, and connection. Jordan met Dr. Webb at a SENG conference in 2018 shortly before Dr. Webb passed away, and was inspired by his work.

In an effort to support SENG, Jordan set out to create the monologue show as a fundraiser in Dr. Webb’s honor. Many of the cast in the show are twice exceptional students. The film chronicles the acting process through the eyes of a young, twice exceptional director. The film shows how support can help create a positive theater experience for neurodiverse actors— from casting, through rehearsals, and finally the performance. With a home movie feel, the documentary shows the O’Kelley family collaborating with mentors to create a low stress environment for the twice exceptional cast. The documentary runs 67 minutes, and is intended to screen at film festivals, universities, and at special needs and gifted conferences.

Upcoming in-person screenings include The Borrego Springs Film Festival (BSFF) on January 14, 2022 at 3:30 PM (www.borregospringsfilmfestival.org). The BSFF is a young and popular Southern California juried film festival in the categories of narrative, documentary, animation, latino, and short films. “O’Kelley Legends” will also screen virtually in the upcoming Los Angeles Show Biz Shriners Festival, in January, 2022 (www.sharpo.com/the-harolds/). The “O'Kelley Legends” documentary premiered in October with an in-person screening at the 2021 Awareness Film Festival at the Regal Theaters at LA Live in Los Angeles, where it won “Special Jury Award for Uplifting Film.” The film has also screened at ten virtual festivals thus far and has won several awards.

The film was produced by The O'Kelley Lab and Three Boots Productions, led by the film’s director, Harri James, who is also Jordan’s mom. Harri James is a former actress, turned script supervisor, turned writer-director. She has written and directed a feature film, four award-winning shorts, and now her first documentary. “O’Kelley Legends” combines Harri’s abilities in filmmaking with her passion for gifted and 2e education. Her approach to parenting is “to embrace your child’s individual differences and support their strengths,” she stated. “I hope this film inspires more families to follow their kid’s lead.”

The O’Kelley Lab is a Los Angeles-based, grassroots effort by the O’Kelley family to create innovative therapies to empower parents and individuals who are gifted and neurodiverse. The O’Kelley Lab supports ideas and therapies that are geared toward improving the lives of people on the autistic spectrum and with other disabilities as well. The O’Kelley Lab hopes the documentary will be an entertaining way to raise awareness about what it’s like to be 2e.

In putting together the show, The O’Kelley Lab made use of a variety of supports such as “Mime as Therapy.” They recruited industry mentors in acting, directing, casting, and producing to work with the cast and crew. This helped the students to find their strengths and to feel supported and successful.