French Santa Helps Kids with Dilemma of ‘Naughty or Nice?’ 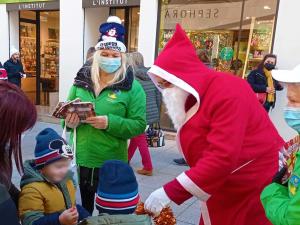 This Christmas season, Père Noël shared the secret of happiness with families in Angers, France.

Father Christmas and his helpers spent time in the city of Angers, sharing ‘The Way to Happiness’ with families to help them achieve happiness throughout 2022.

If one were to think over how he or she would like to be treated by others, one would evolve the human virtues. Just figure out how you would want people to treat you”
— L. Ron Hubbard

ANGERS, FRANCE, December 30, 2021 /EINPresswire.com/ -- Father Christmas and his helpers spent some time in the city of Angers, sharing ‘The Way to Happiness’ with hundreds of families to help them plan success and achieve happiness throughout upcoming 2022. Similar activities took place around Europe with more helpers of Santa in coordination wit volunteers of the local churches of Scientology

“My ‘naughty or nice list’ is aimed to ensure the happiness of children and adults for the present and the future,” said Santa Claus in an interview for this story. This white-bearded gentleman in his traditional holiday costume was found in the streets of Angers, France, distributing a special edition of The Way to Happiness, the common-sense guide to better living written by author and humanitarian L. Ron Hubbard.

Santa really liked one of the precepts of this nonreligious moral code, which is a positive version of The Golden Rule.
“One can get into a lot of conflicting opinions and confusions about what ‘good behaviour’ might be,” it states.

“However, the booklet makes this so simple to understand that it is easy to put into practice,” Santa told us and then read us the following quote:
“If one were to think over how he or she would like to be treated by others, one would evolve the human virtues. Just figure out how you would want people to treat you.”

The book, which was distributed by Pere Noel and his helpers, contains a list of 20 virtues and makes them easy to understand and use. There is even a course on The Way to Happiness website with interactive lessons designed to help those wishing to learn the 21 precepts of the booklet and use them to bring true happiness to oneself and others. “Christmas spirit must be worked on throughout the whole year,” said Santa, “so I fully recommend it especially now that we are preparing for a challenging 2022 where we all have to step up our attitudes and make it the best year ever”.

“For those who prefer watching to reading, or who simply want to spend some family time with a good uplifting movie,” said one of the French helpers of Pere Noel in Angers, “the Scientology Network streams The Way to Happiness book on film” that includes a chapter making it very simple to understand.

And the importance of understanding and implementing these values spells the difference between misery and happiness, as the booklet states:

“There is little joy to be found in gloomy, restrained solemnity. When some of old made it seem that to practice virtue required a grim and dismal sort of life, they tended to infer that all pleasure came from being wicked: nothing could be further from the facts. Joy and pleasure do not come from immorality! Quite the reverse! Joy and pleasure arise only in honest hearts: the immoral lead unbelievably tragic lives filled with suffering and pain. The human virtues have little to do with gloominess. They are the bright face of life itself.”

Broadcast from Scientology Media Productions, the Church’s global media center in Los Angeles, the Scientology Network is available on DIRECTV Channel 320 and can be streamed on Scientology.tv, on mobile apps and via the Roku, Amazon Fire and Apple TV platforms.