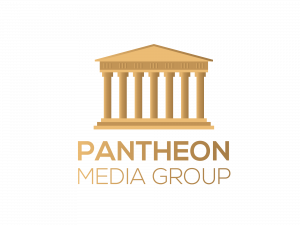 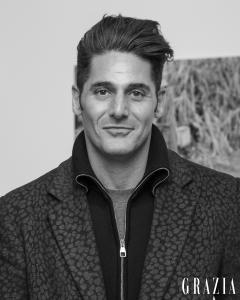 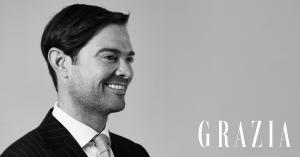 —Joseph “J.” Errico, who has styled the world’s top image-makers, takes on the top role in the U.S. after Grazia was named Best New Magazine Launch of 2021—

He will be responsible for fulfilling Grazia’s brand promise to serve as a cultural authority that inspires, educates, and celebrates the individuality, beauty, and elevated style of women everywhere.

He also has contributed to magazines such as Vanity Fair, Elle Décor, Numéro, Dazed & Confused, The Cut, and Surface while maintaining a celebrity styling clientele of both Hollywood actors and international pop icons.

“J. is already so respected in the fashion space and his repertoire ticks every box that a publisher wants in a leader,” said Brendan Monaghan, Executive Vice President & Chief Global Brands Officer of PMG.

"We're thrilled to have a talented editor, dynamic creator, and style visionary move into this role. Grazia USA has accomplished a lot in its first year, but we’re really just getting started. He has the intelligence, experience, and talent to bring our brand into a new era.

“In a role where the creator economy drives fashion like never before, his appointment is meant to reflect the importance of having a brand leader that can contribute and shape the conversation in editorial as well as visual platforms. Not just an Editor in Chief and not just a Fashion Director, he will bring a 360-degree perspective to all of our Grazia USA creations.”

Said Mr. Errico: “I am excited to be able to contribute to the rich visual history of iconic imagery that Grazia has created in it’s almost 85 year history and particularly honored to lend a American perspective to such a stylish and quintessentially Italian brand.

“I am also thrilled to join a publisher that has—unlike other brands—invested significantly in the fashion media landscape and the next generation of readers and users. Together, I am certain we will deliver a unique mix of sophistication, wit and glamor.”

The next edition of the Grazia USA flagship title will be a 356-page March 2022 issue, in a follow- up to the September 2021 issue, which was named Best New Magazine Launch of 2021 by Samir Husni, director of the Magazine Innovation Center at the University of Mississippi School of Journalism. Grazia Gazette debuted in The Hamptons in 2021. Grazia Gazette: Los Angeles debuted last month, and six further editions are planned for 2022.

ABOUT GRAZIA USA:
Grazia USA is the 21st worldwide edition of Italy’s fashion authority, Grazia. For 80 years across 23 countries, Grazia has remained effortlessly chic, setting the global style agenda for sophisticated women everywhere—permeating seasons, styles, and trends. Grazia USA brings a cultural touchstone to the world’s largest luxury market with a mission to inspire and celebrate the individuality, beauty, and style of women around the world. The digital-first platform, complemented by a quarterly print book, features high-end fashion, beauty, arts, culture, design and travel content alongside celebrity interviews and critical essays. The debut print issue of Grazia USA launched in September 2021. Grazia USA is published under a licensing agreement with Mondadori Media S.p.A. Learn more at graziamagazine.com.

ABOUT PANTHEON MEDIA GROUP, LLC:
Pantheon Media Group (PMG) is an independent next-generation media company that brings one of the most prestigious European fashion magazines to the biggest fashion market in the world. PMG is the exclusive publisher of Grazia USA, the latest franchise of the iconic fashion bible, first launched in Italy in 1938. Also uniquely focused on beauty, culture, society, status, celebrity, and luxury, Grazia USA publishes digitally first and later in print, with the release of the first of its quarterly 400-page magazines in 2021. Grazia USA does more than just inform and inspire an educated audience of influential readers: It is unlike anything the fashion industry in the United States has ever seen. We do not serve readers, we serve users. PMG is a 360-degree media business that is poised for the future, broadening storytelling into virtual and augmented reality, video, television, audio, e-commerce, live events, branded content, innovative advertising solutions and beyond. PMG is headquartered in New York City.