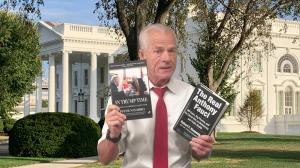 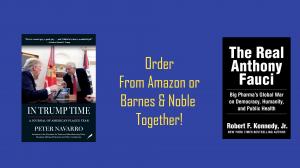 Order on Amazon or Barnes and Noble Today!

If the books that Bobby Kennedy and I have written lead to the firing of Fauci, that would be the best gift we can give to America.””
— Peter Navarro, In Trump Time
WASHINGTON, DC, UNITED STATES, November 24, 2021 /EINPresswire.com/ -- In the dog eat dog world of book publishing, it is rare for one author to endorse a book by a competitor; but In Trump Time author Peter Navarro is doing just that. According to Navarro: “After reading Bobby’s extremely well researched book, I realized my sharp clashes and bitter experiences at the White House with Tony Fauci during the pandemic were not an aberration. In fact, Bobby’s The Real Anthony Fauci uncovers a decades-long history of Big Pharma corruption and bureaucratic incompetence that is eerily consistent with the dangerous behavior Fauci exhibited during my time at the White House.”

According to Skyhorse Publishing: “The Real Anthony Fauci reveals how ‘America’s Doctor’ launched his career during the early AIDS crisis by partnering with pharmaceutical companies to sabotage safe and effective off patent therapeutic treatments for AIDS.” Bobby’s finding is consistent with Navarro’s reporting In Trump Time which documents how Fauci, in the 1980s as the de facto American AIDS Czar, was responsible for the death of “nearly 17,000” gay men.

The Real Anthony Fauci likewise exposes “how Fauci, [Bill] Gates, and their cohorts use their control of media outlets, scientific journals, key government and quasi-governmental agencies, global intelligence agencies, and influential scientists and physicians to flood the public with fearful propaganda about Covid-19 virulence and pathogenesis, and to muzzle debate and ruthlessly censor dissent." This finding is likewise consistent with many of the observations in the In Trump Time book. According to in Trump Time author Peter Navarro: “In my numerous clashes with Tony Fauci privately in venues like the Situation Room and in the public square, Fauci consistently sided with Big Pharma while playing a key role in both the delay of the Trump vaccines and the suppression of powerful therapeutics that could have saved hundreds of thousands of American lives."

Says Navarro: “Today, I am encouraging everybody in America to go to Amazon or Barnes & Noble online and buy both The Real Anthony Fauci and In Trump Time as a holiday package. One key mission of the In Trump Time book is to see Tony Fauci fired and held accountable both for his misdeeds during the pandemic that I witnessed first-hand and for the long history of corruption and incompetence that Bobby Kennedy so aptly chronicles in his exhaustive research. If the books that Bobby and I have written lead to the firing of Fauci, that would be the best gift we can give to America.”