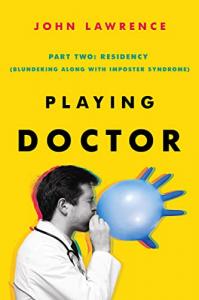 John Lawrence's debut memoir "Playing Doctor" was critically acclaimed and in the second instalment of the series John explores his time as a medical resident.

I stayed up far too late, often crying with laughter, reading about the medical mishaps and blunders.”
— Lauren Weisberger (The Devil Wears Prada)
LOS ANGELES, CALIFORNIA, USA, January 5, 2022 /EINPresswire.com/ -- In 2020, John Lawrence released his debut to critical acclaim. "Playing Doctor" chronicled Lawrence's unlikely route to becoming a doctor despite vowing to his career advisor at Georgetown University that the only thing he didn't want to do was pursue a career in medicine. "Playing Doctor; Part 2: Residency: (Blundering along with imposter syndrome)" follows on from Lawrence's medical school days and follows him through the challenging world of residency. Lawrence tactfully blends his amusing and self deprecating anecdotes with stunning glimpses behind the curtain and into the world of medicine.

John Lawrence's journey from Doctor to author was inspired by his desire to share his life and his work with friends:

"The initial impetus for writing the late night on-call in the hospital email blasts that were the genesis of the story was simply to entertain friends with the fun stories that happened in the hospital. I suppose it is part of what makes us human, telling stories to each other. I hoped my honest tales of a medical student and resident’s life and experiences, confessing to the humor, the fears, confusions of learning how students become doctors; confessing that we, as medical professionals, don’t always know exactly what we’re doing, and also sharing some insight into how dedicated and hard working the medical community truly is—maybe something that has been a bit more visible this year with the Covid pandemic. " - John Lawrence

"Playing Doctor" is available in all major print and digital formats.

John Lawrence was born in New York, grew up England, and attended Georgetown University where he told his career advisor that the only thing he did not want to be was a doctor. He subsequently survived medical school and residency training in Utah.