We Make Stories Come To Life Through Self Publishing 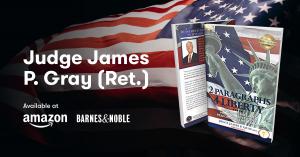 LOS ANGELES, UNITED STATES, June 20, 2022 /EINPresswire.com/ -- The author Judge James P. Gray, often called Judge Jim Gray, is a man of principle raised in the Los Angeles area by his parents, Elizabeth Gray and U.S. District Judge William P. Gray. He graduated from John Muir High School in Pasadena in 1962, received his undergraduate degree at the University of California Los Angeles (UCLA) in 1966, and earned his Law degree from the University of Southern California (USC) in 1971. As a Peace Corps Volunteer, he worked as a Physical Education Professor in Palmar Norte, Costa Rica, from 1966 to 1968, where he specialized in teaching Physical Education, Recreation, and Health. He was also a Criminal Defense Attorney in the Navy JAG Corps and a Federal Prosecutor in Los Angeles. Then Jim served as a trial court judge in Orange County, California for 25 years, and was awarded the Orange County Bar Association's highest Lifetime Achievement award. Aside from his many achievements and credentials, Judge Gray is happily married to his wife, Dr. Grace Walker Gray, DPT, DOT, and they have four children and two grandchildren.

In his first featured book, 2 Paragraphs 4 Liberty: Practical, Effective, Responsible, Libertarian Solutions, Judge Gray emphasizes the significance of Liberty in all aspects. But in doing this, Judge Gray is fact-based and non-ideological, consistently promoting practicality and common sense. In particular, people enjoy his practical advice and wisdom on resolving America's drug crisis and over-incarceration. In summation, there isn't a single topic on which Judge Gray's perspective fails to inform and encourage serious thought in his audience and consistently provides vital insights for readers interested in moving beyond the stereotypes of modern political debate. As proof, his book has received a great deal of positive feedback. Here is just one out of many: "A quick, easy read to understand Libertarianism, why it's just, and why it works. Jim Gray's sincere passion and concern for humankind are evident in the passages of this book. He shows liberty and free markets for what they are: the best and most humane way to treat people. And it's always good to have an easy-to-read format rather than a dry one. But on 99% of the issues, I totally agree and appreciate his fresh approach. I highly recommend this book to new libertarians and those who simply want to understand what Libertarianism and Liberty are all about." - Carla Howell, Former Director of the National Libertarian Committee.

This review speaks volumes about the book's audience value and its overflowing knowledge and discernment transmitted to readers.

As for the second book, entitled All Rise!: The Libertarian Way with Judge Jim Gray, the theme is the government's failure to handle economies throughout history. It continues to do so under stress today, leaving a debt legacy for our children and grandchildren. This book also provides us with an inside look at Judge Gray's ideological transformation, giving a clear overview of Libertarianism, its values for America, and how it stands to unite us – precisely what we need in these divisive and frustrating times. He answers these questions directly! What distinguishes Libertarians from other political parties? How do libertarian ideas, techniques, and principles lead to more effective "pursuits of happiness" than other political parties' approaches? How does Judge Jim Gray dare to claim that the Libertarian Party is today's only political party in the mainstream of American political thought? All of these and more will be answered in “All Rise!: The Libertarian Way with Judge Jim Gray” to the complete delight of the readers.

So Judge Gray shows how Liberty is ingrained in our country's DNA, all the way back to the first landing of the Pilgrims on Plymouth Rock. All Rise! unfolds alongside Judge Gray's childhood and upbringing, examining the events that fueled his quest for independence. Exclusive interviews give a rare and nuanced glimpse at Judge Gray at various stages of his life, revealing the voices of those closest to him. In under 13 seconds, how did Judge Gray, a former Congressional candidate and member of the Republican Party of Orange County's Finance Committee, swing toward Libertarianism? Peek how he has remained an active and committed member of the Libertarian Party since that important decision. Follow him through his campaigns as a Libertarian for the U.S. Senate in 2004, Vice President in 2012, and President in 2020. This book shares Judge Gray's mission to mainstream the word Libertarian – not simply the word, but the party's values, approaches, and principles. Direct and frontal attacks on our freedoms and liberties are unacceptable, and Judge Gray's platform offers an antidote to the continual trespassing of an overzealous government on its citizens. It also illustrates how libertarian reforms can be implemented to enhance people's lives significantly and includes a foreword by Tom Campbell, former Member of Congress from California (1989-1993; 1995-2001). Moreover, All Rise! has thoroughly examined many of today's problems and demonstrates that their solutions are not insurmountable. More importantly, it is an appeal to defend the highest attribute of the human being: individual Liberty.

Maximizing the virtue of Liberty distinguishes our modern civilization from all that has come before it and vindicates what has made America a leader among nations today. We are the most approachable people on the planet. Judge Gray has previously aided our country in achieving that reality, and his ideas will lead us to do so in the future. The books 2 Paragraphs 4 Liberty and All Rise! The Libertarian Way with Judge Jim Gray will be on display at the 2022 American Library Association Annual Conference from June 23-28, 2022, in Washington, D.C. Readers are invited to participate in the event's thought-provoking activities to make it even more purposeful and worthwhile.

To learn more about Judge Gray and his books, please visit his website at www.JudgeJimGray.com or read the paperbacks at Amazon.com.