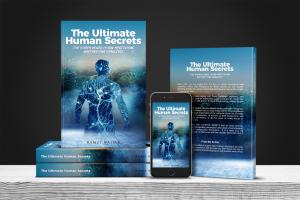 A guide for readers to build better versions of themselves.

A guide for readers to build better versions of themselves.

Entrepreneur Najjar opens his book on a note of millennial uncertainty. Humans, he contends, seek power by nature, including the power of knowledge, but in the present era, “our circumstances increasingly seem to have more deterring effects on us than we have on them.” The key to combating this, according to Najjar, is to work on achieving a state of inner being that prioritizes substance instead of mere appearance: “It’s more than just what looks healthy and shiny on the outside,” he writes. The author asserts that the human brain and body will always tell a person what’s right and wrong but that many people spend their lives ignoring that inner voice instead of training themselves to listen to it and take heed. In forceful, passionate prose, Najjar walks his readers through several aspects of this inner awakening, including the importance of sleep, which he describes as “recharging” the body with electricity, which binds to “memory particles” that flow throughout the body during this recharging. The goal that Najjar ultimately sketches out is one of achieving personal mastery over the unconscious “twisting and deforming” of reality by taking “a more conscious approach to living.”

This basically sound advice, however, is offset throughout the book by a great deal of vague phrasing and questionable assertions; there are no such things as “memory particles,” for instance, and there’s no solid evidence that humans naturally possess infallible moral compasses. As a result, when the book repeats typical, long-standing self-help claims about how it doesn’t matter what life throws at a person but only how that person responds, readers may find themselves somewhat skeptical.