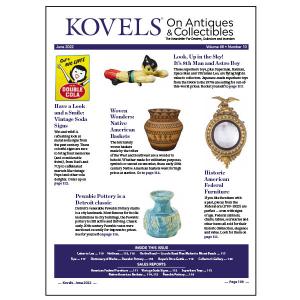 CLEVELAND, OHIO, US, June 7, 2022 /EINPresswire.com/ -- Superhero toys sold for out-of-this-world prices at a New Jersey auction and are featured in a sales report in the June 2022 issue of Kovels On Antiques & Collectibles newsletter. Pictured with prices are Japanese-made superhero toys from the 1950s to the 1970s that include Astro Boy, 8th Man, Ultraman Leo and the rare Superman Flying Spaceman toy that took top price honors, soaring to a high of $57,000.

Kovels greets summer with a refreshing look at soda advertising signs. Find many colorful signs pictured with prices in the June newsletter, brands such as Double Cola (“Get a big lift!), Squirt (“never an after-thirst”), Spiffy (“a swell cola drink”) and other vintage favorites with catchy slogans.

A recent California auction showcased American Indian art and Kovels’ June issue pictures a selection of early 20th century baskets made by American Indians of the West and Southwest. The intricately woven baskets with symbolic designs are prized by the collectors who paid hefty prices. Readers can also learn about their construction and what they were used for.

Detroit’s venerable Pewabic Pottery workshop is a city landmark, famous for its tile installations in city buildings. Classic early 20th century Pewabic vases and other items were recently auctioned in Detroit for impressive prices. See some of the shapes—vases, a cup, covered jar, and inkwell—and read about the glazes and the company’s history in Kovels’ latest newsletter. Also, digging a little deeper, the June Dictionary of Marks lists some of the marks found on Pewabic pottery along with the dates they were used.

And for collectors who like furniture with a past, pieces from the Federal era are perfect. Federal cabinets, chairs, tables, secretaries and other items sold recently in Cincinnati. Buyers appreciated their elegance, historic distinction and value. See some examples and learn what bidders paid to make them theirs in the latest issue.

The Kovels go “on the road” to the Lincoln Road Flea Market in Miami Beach and share some of the things that caught their eye. The Collector’s Gallery answers readers’ questions about a Hull vase, a glass dish with silver overlay, a Duncan Phyfe games table, and German porcelain bathing beauties figurines. And more than 70 antiques and collectibles are listed in the June Buyer’s Price Guide.

Kovels On Antiques & Collectibles newsletter is available as a print subscription, or as a digital version that is included in the Kovels Knowledge and Kovels All Access memberships. Start your Kovels Knowledge Free Trial now or login.

About Kovels
Terry Kovel and Kim Kovel provide collectors and researchers with up-to-date and informed information on antiques and collectibles. The company was founded in 1953 by Terry and her late husband, Ralph. The Kovels have written over 100 books, including their annual Kovels’ Antiques & Collectibles Price Guide, now in its 54th edition, as well as dozens of leaflets, and three series about antiques for television.

Kovels.com, online since 1998, offers a bird’s-eye view of the market with news, information and over 1 million prices. Readers will find auction reports, readers’ questions with answers, a marks dictionary, and identification guides covering antiques and collectibles from 1750 to 2010. Also included is the digital edition of Kovels On Antiques & Collectibles Newsletter with 47 years of archives. To stay in touch, subscribe to Kovels’ free weekly email, Kovels Komments, at Kovels.com.