Kronos Rising: Purgatory Has Arrived, and it’s Hell on Earth 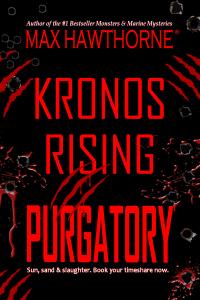 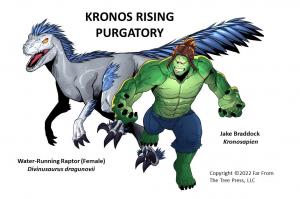 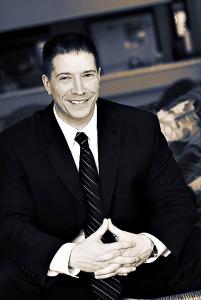 The newest novella from Far From The Tree Press, LLC proves that big thrills and suspense can come in small packages.

“If you bite your nails, you'd better wear oven mitts when reading Kronos Rising. It will drag you down to the depths of fear and take you back for a breath of air as fast as you can turn the pages.”
— -- Stan Pottinger, NY Times Bestselling author of THE BOSS
NEW HOPE, PA, US, June 20, 2022 /EINPresswire.com/ -- Max Hawthorne, #1 Amazon bestselling author and 2-time Book of the Year award winner, has just released the latest book in his popular Kronos Rising series. Its title is Kronos Rising: Purgatory and, as the author puts it, it’s a “pocket battleship”: maximum carnage crammed into a comparatively small format.

“When Kronos Rising: Kraken 3 left off, we saw a mutated Jake Braddock leaving a beached submersible that’s ended up in, of all places, Diablo Caldera. That’s the prehistoric island where the pliosaurs in the series and a host of other marine nasties originated,” Hawthorne explained. “Jake had boarded the mini-sub back in Tartarus, the quasi-military research facility he’d been imprisoned in, and that now lays in ruins after the Kraken’s attack. He knew his nemesis, Eric Grayson, was going to attempt to escape in the sub, so he concealed himself and waited. When the sub’s autopilot ends up taking it back to its previous destination – Diablo – Jake finds himself in a bit of a pickle.”

From there, the book’s synopsis tells the tale:

Tartarus’s reactor still burns in the aftermath of the Kraken’s fury as a reborn Jake Braddock steps out of the Remora submersible, with murder on his mind. He finds himself in the last place he expected to be: Diablo Caldera, the savage, Cretaceous-era Island where the pliosaurs infesting the world’s oceans came from. Undeterred, the seven-foot man-reptile advances. But his plan to exact revenge upon the man who ruined his life and murdered the woman he loves runs into a brick wall.

A wall with teeth.

Diablo’s primeval jungles are infested with legions of Homo sauridae, the man-eating creatures created as a result of Eric Grayson’s vile experiments. Jake soon finds himself embroiled in a bloody fight for his life. The bipedal saurians are a mindless, slavering mob. They cannot be reasoned with. Even worse, they’re starving.

And Jake is on the menu.

“The situation becomes complicated because not only does Jake find himself surrounded by an army of deadly creatures, he’s also forced to decide if he’s going to protect his nemesis (with the goal being to exact revenge on him later) or leave him to the monsters,” Hawthorne pointed out. “The book is only 124 pages, but it’s got a full-length novel’s worth of action, suspense and thrills. First, we did something we’ve never done before; we included some terrific, full-color* graphic art illustrations of some of the characters and creatures in the story. Then there’s the plot itself. It’s a non-stop fight for survival, and along the way and as the tension builds, we encounter everything the caldera is known for, from giant predatory fish to sixty-foot crocodiles to the water-running raptors I invented. Can you imagine, pack-hunting dinosaurs that can literally run on the surface of the water? Even a speedboat might not save you!”

Kronos Rising: Purgatory is available now in Kindle format from Amazon, with the softcover version being released shortly.