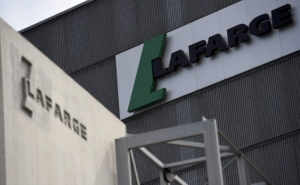 Lafarge has been indicted for Crimes Against Humanity for their complicity with ISIS' atrocities in Syria. Lafarge paid ISIS and its affiliates more than $15 million. Lafarge's management team abandoned the cement plant workers when they were overtaken by ISIS.

A "Heat Map" of the Lordstown Landfill shows where the greatest concentrations of toxic hydrogen sulfide gas are located. CALL continues to wait for the Ohio EPA to release the off-site toxic gas public data for 2022. 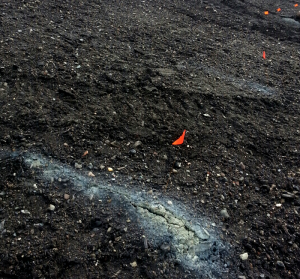 A "Scab" is where concentrated toxic landfill gas has denatured and destroyed cover soil and clay cap material. The gas pours out in high levels at these locations. When scabs break out in "swarms" of a dozen or more, it becomes a dangerous situation for field workers.

Lafarge, which owns 98.67% of its Syrian subsidiary LCS, not only bought raw materials from ISIS but also made monthly payments amounting to a total of 15.5 million US dollars to...ISIS.”
— French Court of Appeals
CLEVELAND, OHIO, USA, June 8, 2022 /EINPresswire.com/ -- According to Press TV, Paris, “French cement giant Lafarge has lost their final appeal and will undergo a high-profile trial in a precedent-setting case which could force Western corporations to stop turning a blind eye to terrorism.

Lafarge will be tried for complicity in crimes against humanity in Syria. They are accused of working with Daesh terrorist group for years in Northern Syria, with the concrete produced in their factory used in battlefield infrastructure which terrorists needed to keep the unrest going.

They will be tried for financing terrorism - for allegedly paying 13 million euros to terrorist groups from 2010 to 2014, supposedly to keep their factory safe. They will also be charged for endangering the lives of others, for putting its 11 Syrian employees at risk. The original suit was brought by French NGO Sherpa on behalf of the workers.

After the scandal broke Lafarge was merged with Swiss giant Holcim, but eight Lafarge executives will now face justice.

The French Court is also allowing the persecuted Yazidi minority to enjoin the litigation.

“In its analysis, the Court highlighted that ISIS had committed crimes against humanity in Syria including that it “has denied the right of the Yazidi to exist and justified their destruction according to a concerted plan”. After reviewing the evidence, the Court concluded that Lafarge, which owns 98.67% of its Syrian subsidiary LCS, not only bought raw materials from ISIS but also made monthly payments amounting to a total of “15.5 million US dollars” to local armed groups which included ISIS.

Natia Navrouzov, Legal Advocacy Director at global Yazidi NGO Yazda, commented on the judgment that:
“This decision of the Court of Appeal shows again that ISIS is not only about a group of individuals who joined a terrorist group and committed the most heinous crimes. It is also about a whole system that enabled these crimes and that needs to be held accountable for to ensure that there is no impunity gap for international crimes.”

According to the East Liverpool Review, “A June 9 preliminary hearing and pretrial was set in county Municipal Court for Timothy Wirtz, 46, Lowellville, charged with compelling prostitution, a third-degree felony; attempted unlawful sexual conduct with a minor, a fourth-degree felony; possession of criminal tools, a fifth-degree felony; and engaging in prostitution for allegedly soliciting sex in exchange for $80 from an undercover agent posing as a 15-year-old girl and driving to Salem to meet her on Monday.”

Lafarge’s previous regional environmental manager, Mark Schmidt, who was required to report the Lordstown Landfill for over 15 years, has a hearing scheduled for Tuesday, June 14, 2022 with Ohio’s Industrial Commission (OIC Case #291-198428). Mr. Schmidt was hospitalized in late 2020 with toxic landfill gas poisoning and was forced to retire early in 2021 due to toxic gas-related health effects. This is the fourth re-scheduled hearing for Mr. Schmidt’s industrial disease claim.

Extensive gas sampling occurred at Lafarge's Lordstown Landfill throughout 2019. The results reported levels up to 39,000,000 parts per billion of hydrogen sulfide which is many times OSHA's paralysis and death limits if inhaled. Ten other toxic gases were also discovered at extreme levels over the 100 acre landfill.

Lafarge's Lordstown Landfill has received more than 400 odor, nausea and sickness complaints from its neighbors and elected officials and received consent orders from the Ohio EPA in 2016 and 2019. Lafarge also received a May 10, 2022 Ohio EPA order to install an experimental toxic gas collection system this summer.

Yet the landfill continues to operate. The Trumbull County Health Department, headed by Mr. Frank Migliozzi, has never denied the Lordstown Landfill's annual license application in 19 straight years. The Trumbull County Health Department receives approximately $30,000 a month in waste disposal fees from the Lordstown landfill and conducts one landfill inspection every 90 days.

A FOIA request for the off-site hydrogen sulfide data from an Ohio EPA meter was filed a month ago. Data for the toxic gases detected off-site of the Lordstown Landfill for the entirety of 2022 have not been made available to the public. The raw meter data, which is not protected by patents or other sensitive corporate or government security issues, is "pending legal review” by the Ohio EPA. The data is critical to understanding the public health risks posed by Lafarge's landfill.

Several law firms are evaluating the factors and evidence to proceed with a massive class action lawsuit against LafargeHolcim, Holcim US, the Lordstown Construction Recovery Landfill and their corporate affiliates. Many litigations against other nuisance-causing and health-impacting landfills around the United States have been upheld in favor of the residents and communities.