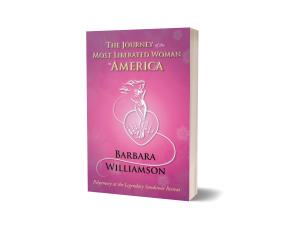 PEMBERTON, NEW JERSEY, UNITED STATES, June 9, 2022 /EINPresswire.com/ -- The late 60s was a time of extreme conservatism, but Barbara Williamson was one of the bold few who burst the conservative bubble in the name of sensual freedom. From her humble beginnings to being celebrated as “The Most Liberated Woman in America,” Barbara’s boldness in choosing an extraordinary life of love and adventure is vividly pictured in her profoundly penned, mesmerizing memoir, The Journey of the Most Liberated Woman in America.

Barbara Williamson was born in 1939 and grew up on a farm in Missouri. After graduating high school in Chamois, she moved to sunny California and pursued a career in insurance sales. This offered her unlimited earnings without the discrimination of being a woman. Barbara peaked in a male-dominated company, but this did not afford her happiness.

Barbara needed a change that happened when she met and wed John Williamson, labeled as “The Messiah of Sex.” Together, they engineered the beautiful, then-controversial Sandstone Retreat. This fascinating sanctuary provided a ticket for members to join a sexual voyage; all sensual, sexual and pleasurable. Fifty years later, still an unforgettable experience remains in their lives. Barbara is the godmother of Polyamory, inspiring a movement that has become widespread in the world. Sandstone Retreat afforded Barbara a purpose in life, leading people into an alternate lifestyle where sexuality is honored and liberated rather than boxed in conservative ideology.

Sandstone Retreat became outrageously popular, which made Barbara and John darlings of the media as outlets clamored for interviews. It was known as the hub for the sexual revolution that hosted a multitude of members and a whopping flock of visitors.

About Writers’ Branding
Writers’ Branding is a full-service self-publishing company that provides aspiring authors exclusive access to publicity and a pool of book evaluators and marketing creatives and bridges them to literary agencies and traditional publishing houses. Please visit www.writersbranding.com for more information.