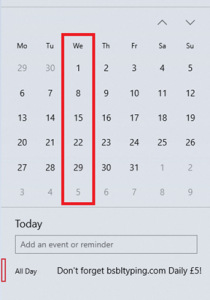 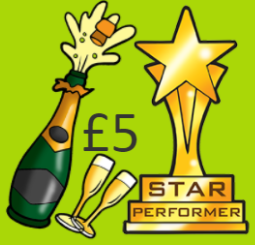 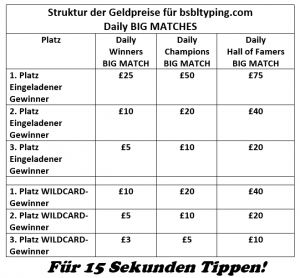 You could make a mistake but still win
Each competitor can enter as many times as they want within the 24 hours of the competition and it’s the fastest and most accurate typist who wins, well, sort of. The company spokesperson explains:-“We thrive on feedback, and having now conducted over one hundred speed typing cash prize competitions of various sorts we believe that there is an appetite for a bit of quick mid-week fun at home, in school or at work with a daily cash prize speed typing competition. It’s free to enter and you’ve got the chance of a handy little cash prize.”

“The Daily £5 Prize Fastest Typist Competition will run for just one day a week to begin with and if the demand requires it we’ll add more days each week. Like our Weekly £10 and Monthly £30 Prize speed typing competitions, there will be a league structure of Winners, Champions and Hall of Famers so that the faster typists can graduate from the daily competition to what we call Big Matches where the cash prizes are higher.”

“The regular bsbltyping.com Weekly £10 Prize Fastest Typist and Monthly£30 Prize Fastest Typist Competitions have always had accuracy at the heart of their scoring system, with highest WPM and the highest accuracy beating the highest pure WPM score. However, this has been modified recently such that all accuracy scores over 98.5% are ranked the same for scoring purposes, so if you make the odd mis-keying, you aren’t penalised. This should take the pressure off being 100% accurate and will let the competitors concentrate on their speed a bit more.”

The league structure for Daily Competition higher cash prizes
Details are yet to be finalised but it is expected that the league structure will work on the basis that if a Daily Competition winner wins four competitions with any ten week period then they become a Champion after which they have to take a four week mandatory break, and then, if they win two more daily competitions within any ten week period, they will become a Hall of Famer and can no longer take part in the daily competition. This is so that no one competitor dominates the competition. However, those competitors who win through to these leagues can take part in Daily Big Match Speed Typing Competitions where competitors within each league compete against each other for higher cash prizes of £25, £50 and £75 respectively.

www.bsbltyping.com is the biggest cash prize speed typing competition website on the Internet, hosting regular weekly and monthly cash prize fastest typist competitions and sending prize money all over the world. The higher prize money competitions are structured according to a league system of Winners Champions and Hall of Famers.

*All keystroke data is stored in The BSBL Infinite Keystroke Database for validation and analytical purposes.