New John Pilate Mystery Thriller May Be the Last 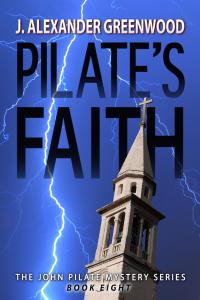 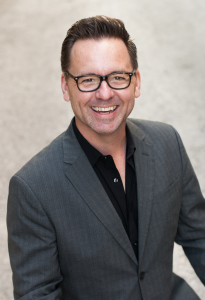 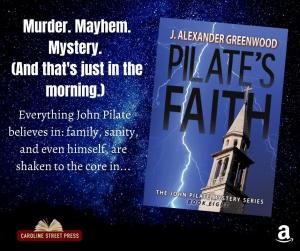 PILATE'S FAITH Returns to Where It All Started

I’ve written nearly half a million words about this hapless amateur sleuth with a funny name. When I started writing I had zero expectation there would be more than one book, let alone a series.”
— J. Alexander Greenwood

KANSAS CITY, MO, UNITED STATES, November 20, 2021 /EINPresswire.com/ -- After nearly half a million words, it all comes down to faith in the eighth--and potentially final--book in the John Pilate Mystery Series.

“I’ve written nearly half a million words about this hapless amateur sleuth with a funny name,” said Kansas City-based author J. Alexander Greenwood. “When I started writing I had zero expectation there would be more than one book, let alone a series.”

The John Pilate Mysteries center on John Pilate, a college instructor who has a knack for stumbling into mysterious, dangerous situations. The 2010 series debut, PILATE'S CROSS, was based on a real-life murder-suicide at a college campus in Nebraska. Subsequent novels in the award-nominated series include PILATE'S KEY, PILATE'S GHOST, PILATE'S BLOOD, and PILATE'S ROSE. An acclaimed book of short stories, PILATE'S 7 and the novella PILATE'S SHADOW round out the series, all published by Caroline Street Press.

Surviving a recent attempt on his life, a weary Pilate returns to Cross Township, where a bizarre string of shootings has paralyzed the tiny college burg. Pilate joins forces with the county sheriff to find out why people are being terrorized in his name. But, unfortunately, when he turns to his family for support, he finds only hardened hearts. People are dying, accusing fingers are pointed his way, and he has nowhere left to turn.

Greenwood said he believes the series has run its course but isn't completely closing the door to future adventures. "It really depends on the interest expressed in this book," he said. "And I have some other irons in the fire creatively I'd like to explore before revisiting Pilate."

Besides the Pilate mysteries, Greenwood co-wrote and edited BIG CABIN AND DISPATCHES FROM THE WEST with the late Robert E. Trevathan. He also wrote the Amazon nonfiction top sellers THE PODCAST OPTION and KICKSTARTER SUCCESS SECRETS. He is a public relations consultant and an avid podcaster. Greenwood is host and producer of two shows, Mysterious Goings On and PR After Hours.

Greenwood will sign copies of the entire series at Afterword Tavern and Shelves in Kansas City on December 18, 2021, from 3 to 5 p.m.