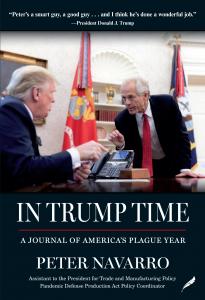 Despite large sales, The New York Times has omitted In Trump Time: A Journal of America’s Plague Year from its November 21 non-fiction bestseller list.

According to statistics published by Bookscan, the definitive industry source used for book rankings, Navarro’s In Trump Time should have been placed at least #3 on the New York Times list. All Seasons Press publisher Louise Burke voiced this opinion: “The New York Times has a long history of knocking conservative authors off their bestseller lists. Yet such an exclusion has significant knock-on effects as books that don’t appear on the NYT list are often unable to develop momentum and reach a broader audience.”

NOT ON NYT LIST
In Trump Time Peter Navarro 33,314