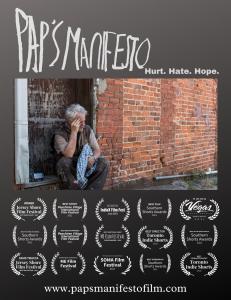 The short film has racked up a number of accolades and awards.

The deeply moving story of Pap Mayflower explores a grief-stricken father’s commitment to avenge his son’s death. After his son is killed-in-action by a blast in Afghanistan, Pap abandons his young granddaughter, Ricki, with her estranged aunt and sets out on a secret mission to truck bomb a mosque as evening prayers let out. What happens when grief, post-traumatic stress disorder, and despair drives an otherwise good man to build a truck bomb, park outside a mosque, and push the button?
“Pap is convinced everything has been taken from him,” explains Danuser. “The deaths of his wife and son have festered into a rage, and he wants revenge.”

The film has received praise for its portrayal of how human emotions and internal struggles can lead to extremism. Emmy nominated, Hollywood veteran writer/producer and actor, Steven Kampmann says: “Perilous times—our basic decency and humanity to one another are under full frontal attack, so the only dramatic stories that interest me at all are ones that either reinforce our humanity or reclaim it. Chris Danuser's timely [“Pap’s Manifesto”] story superbly does both.”

For a complete list of awards, nominations, selections, and more visit www.papsmanifestofilm.com.