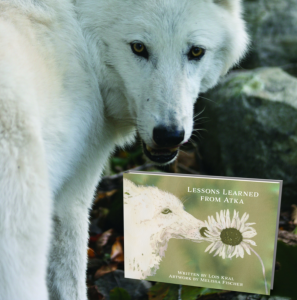 Atka, the wolf, traveled through many eastern states as the ambassador for the Wolf Conservation Center

I wrote this book to share what a very special wolf Atka was. His day-to-day routine showed me that we all have what it takes to lead a happy and rich life.”
— Lois Kral

PLYMOUTH, MA, UNITED STATES, June 17, 2022 /EINPresswire.com/ -- Briley & Baxter Publications is pleased to announce the release of Lessons Learned from Atka, the beautiful and inspiring story of Atka, the traveling ambassador and beloved wolf from the Wolf Conservation Center in South Salem, NY. Lessons Learned from Atka was written by Lois Kral and is available for preorder on Amazon and Barnes & Noble and will be released on June 28.

During his lifetime of sixteen years, Atka traveled through many eastern states, visiting thousands of schools, libraries, and an insurmountable number of community events. This special wolf was known not only regionally, but also nationally and globally.

"I wrote this book to share what a very special wolf Atka was. His day-to-day routine showed me that we all have what it takes to lead a happy and rich life. His story shows us how to enjoy our journey through acceptance, through friendships and the joy of just being who we are,” said Kral.

The lessons learned from Atka’s life will inspire hope, acceptance, and positive change in the lives of animal lovers across the world.

A portion of the proceeds will benefit the Wolf Conservation Center.

About the Author:
Lois Kral has volunteered as an educator and animal care specialist at the Wolf Conservation Center (WCC) since 2006 where she has helped raise three of the ambassador wolves and assisted the curator in taking care of Atka. Lois travelled with Atka on his road trips through his teaching adventures, as well as his experiences with programs at the WCC. Watching him all those years has given her a perspective that is as unique as it is rare. Lois is a retired public music educator of 35 years and lives with her cat, Macy Jane, and horse, Mexico.

About the Artist:
Melissa Fischer grew up in rural New York, spending much of her youth roaming a nearby wildlife sanctuary or playing with her dogs, cats, and other pets. Through these happy hours immersed in the world of nature and animals, Melissa developed a strong love for the natural world and its inhabitants. She has sketched and painted while traveling and hiking in various regions of the United States, especially in National Parks, and has been Artist-in-Residence at Acadia National Park. Melissa particularly enjoys sketching from life and has filled many pages with sketches of Atka and other wolves at the Wolf Conservation Center.