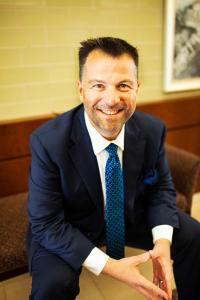 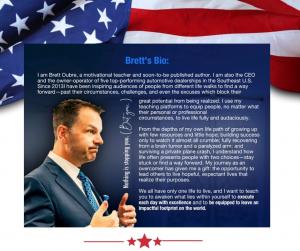 Tell your children what they need to hear, that's the true test of love.”
— Brett Oubre
NEW ORLEANS, LOUISIANA, UNITED STATES, June 15, 2022/EINPresswire.com/ -- As Father's Day will be recognized this Sunday, June 19, Brett Oubre, the CEO of the six top-performing auto dealerships in the Southeast United States, wants to recognize the leaders, the teachers, the mentors, and the fathers who exhibit the way forward for everyday people and their future tomorrows.

Endorsed by John Maxwell, a well-known leadership expert, Brett Oubre is a speaker, mentor, and author of a new book 12- Steps for Boundaryless Success to launch in Fall 2022. He is a self-taught leader instilling, exhibiting, and advocating for the way forward. Oubre, surviving a private plane crash, a brain tumor, and paralysis, brings his story of hope found in his new book, on the principles of faith and true patriotism with his "Made in America" brand from humble beginnings to being fully equipped and leaving a footprint of impact on this world.

Brett Oubre stated... "I am a father first. Tell your children what they need to hear, that's the true test of love. As we all faced the uncertainty of the pandemic and today's ongoing news headlines, the culture of our future is raised on shaking the bottle, taking a pill, a microwave pulse of instant gratification with an iPhone Blue Light addition which society teaches success equals arrogance. My failures taught me more..."

Oubre has overcome the odds and remembers a much simpler time in our nation from mowing the grass as a kid to being raised as a Pastor's kid. Today, he leads from within, looking out for his employees no matter the cost, as he is the CEO of the top 6 auto dealerships in the Southeast United States. He leads, speaks, mentors, and guides through tragedy and opportunity.

Brett Oubre concluded..."We the father, the mother, the grandparent, aunt, and uncle, no matter the cost must ReImagine a 360-degree of ourselves, Painting a New Picture, Finding the Passion, Tapping into the Energy that comes from living your passion... with a new way forward."

Making his Mark on Society -- From moving cars to motivating people, a life well-lived in Louisiana

It’s easy to look at Brett Oubre’s numerous successes and assume that he always envisioned this life for himself. Although Oubre didn’t come into his own until much later on, his blueprint for success manifested itself at a very early age.

By the time he was eight years old, Oubre was a budding salesman, selling Christmas cards door to door in his Lake Charles, Louisiana neighborhood. Within a short time, he became one of the top ten Christmas card salespeople in the country. By the age of eleven, he was operating his own lawn service company.

Oubre spent years chasing different ventures until he found a career with autotrader.com. After listening to a speech by the company’s VP of sales during orientation, Oubre knew he had found his purpose and went straight to his room to write a list of goals.

Through sheer drive and determination, Oubre became autotrader.com’s #1 salesperson within his first year of employment. He spent four years advancing within the company, leaving in 2003 to become an equity partner with a dealership.

Within six weeks, Oubre took over the management of a car dealership that was not performing well. Within 60 days, the dealership increased its sales by 800%.

Oubre owned and operated the dealership with seven partners until 2007. From there, he purchased adjoining property and built a shopping center. That venture would soon consume most of his time, so he sold his shares in the car dealership and focused on the shopping center which he operated until 2013.

During that time, Oubre was diagnosed with a brain tumor and a seizure. Following surgery, he lost the use of his left arm and had to undergo intense rehabilitation.

Four months after his surgery, Oubre spoke with a colleague in Orlando, FL and learned of a car dealership for sale in Ferriday, LA. With his arm still in a sling, Oubre drove straight to the lot and purchased it on the spot. Within six months, Oubre earned back all of his initial investment.

While successfully operating his collection of dealerships, Oubre continued to focus on motivational speaking and outreach. On average, he had about ten speaking engagements a year prior to the COVID-19 pandemic.

Employing his drive for success, Oubre then began writing a book, the next leg of his mission to connect with those harboring an entrepreneurial spirit and attempt to give them a sense of direction. His idea is, “Everybody has somebody they relate to,” and he wants to create resources for those searching for a sense of direction who could potentially relate to his story. Oubre has a YouTube channel as well, where he publishes motivational content.

As his entrepreneurial career evolves, Oubre’s motivation remains the same. He divides his time between his six successful car dealerships and his thriving motivational speaking career. Oubre also has an impending book release, a continuation of his mission to reach as many entrepreneurial minds as possible.