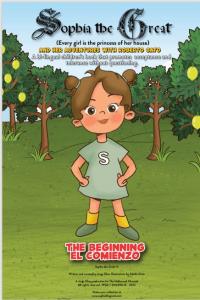 Jorge A. Elias, a popular Hispanic TV personality writes this fun 10 part children illustration book to help not only the children but other educators to teach and instill what is the meaning behind acceptance and tolerance, how to have it, and why to have it among other valuable life lessons.

The story revolves around a young girl named Sophia who has a very vivid and lively imagination. She sees things from a very unique perspective, the house where she lives can be a castle, and the backyard can be a wild forest an entrance to another world, where everything is possible. She meets a Latino lion by the name of Roberto Gato one day and they venture into the unknown.

This is a bilingual book covering both English and Spanish languages. It smartly integrates words used in our everyday lives in both Spanish and English so that children can learn both while growing up. The illustrations are a big part of this book. Without them Sophia the Great wouldn’t have as quaint and precious feel as it does with these illustrations.

Jorge A Elias was born and raised in Argentina. At the mere age of 16, he embarked his acting career by joining the Teatro Experimental which translates to Experimental Theatre. There he performed numerous plays for local and international playwrights. Later in 1969 he migrated to America with the knowledge of only two words: I work. He began working in Lucky Stores warehouse in 1970 and simultaneously pursued his acting career. One of his co-worker John Hall told him that if “Lassie the Collie made famous”, why can’t you? After his audition, Jorge got a regular weekly role in a variety show called “Escalera a la Fama” and from there on he became part of the Spanish entertainment community.

Now a proud father of 2 daughters, Natasha Bernardette and Brittany Marie and grandfather to Ryan, Madison and Sophia, Jorge lives a happy fulfilling life. Now he wanted to leave behind something more relevant that his multiple TV shows, that is why he came up with the idea of Sophia the Great, a collection of children stories to help Sophia and readers around the world connect with his beloved ancestry.