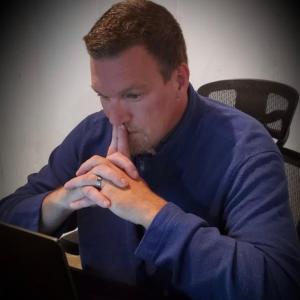 “A conflict spanning time and space,” war at global scale. The Guardian War series tells tales of civil unrest due to food shortages, and territory skirmishes.

Writing about war and has never been easy for me. I’ve never confronted carnage firsthand so I struggle internally with telling my stories in the setting of global war from a first person perspective.”
— Jeremy Morang

RANDOLPH, MAINE, UNITED STATES, June 13, 2022 /EINPresswire.com/ -- Morang’s second release of 10, The Guardian War Chronicles Series is a gripping science fiction Action-Adventure. A futuristic setting that is eerily similar to current times resonates with the readers. A society living within the confines of a global block-chain, government instability, food shortages and universal war takes readers on a fantastical journey of suspense and wonder with an ending that leaves the audience questioning everything.

Indie author Jeremy Morang of Randolph Maine has been a fan of fiction books since the early days of grade school. Inspired by the works of another Maine-based author you may recognize, Stephen King is just one of many acclaimed book authors Jeremy’s unique writing style has been crafted around. “I was spellbound. Hypnotized. Being a child of the 80’s, and a teen of the 90’s I was already accustomed to the classic science fiction tales in movies and on television with: Star Trek, Star Wars, Flash Gordon and other space travel adventures, but reading words on paper for the first time in a sci-fi book was a wholly different experience,” says Morang. “I had a sizeable collection of fiction novels: Stephen King, Weiss and Hickman’s Dragonlance series, and was a fan of JRR Tolkien but I had never delved into the realm of science-fiction books until a little later in life.”

Morang’s unique writing style as a male author writing in first-person female roles has captured his reader’s attention immediately and has the audience on edge from cover to cover. The author expresses concern however, as the content relates to uncomfortable similarities between the book’s setting, current times and war on a global scale.

“Writing about war and the after effects of battle has never been easy for me,” Morang explains. “My personal experiences in areas of “war” have been restricted to classroom education and history books. What the television shows us on the news. Blockbuster movies. Posts shared on social media, and intimate narratives told by family members and friends who have experienced warfare and were willing to share those stories with their trusted confidants. However, I’ve never confronted or witnessed carnage firsthand. Due to the fact I can’t relate to the suffering and hardships others have endured I struggle internally with telling my stories in the setting of global war from a first person perspective.”

The Guardian War Chronicles highlights the topic of war, on a universal scale. “A conflict spanning time and space.” And not unlike the wars plaguing Earth’s history, the Guardian War series tells tales of civil unrest due to food shortages, and territory skirmishes. The after effects of the rampant conflicts which linger far beyond the storms of bullets, death, and devastating weaponry used by warring factions. Guns and seeds are popular currencies.

A region of space where Block-chain technology is used by almost everyone because physical currencies are hard to locate and consistently dropping in value. Scavenging for goods and materials, and making shady deals in shadowy corners has become a commonplace activity for survival among the general population. The Atlantis Paradox, Vol II in the Guardian War Chronicles, tells a futuristic story of how humanity has been attempting to heal Earth, after two major wars. “Fighting to undo all that had been done.” Harnessing and distributing our world’s natural powers. Making ardent strides to repair what had become broken over time.

Repairing an unstable government and returning the sole focus toward the wellbeing of the many. The decisions and sacrifices which are made for the greater good to bring the world together under a common cause. The main characters throughout the series are thrust into conflict, and are chosen to undertake impossible tasks. Those tasks are all centered on bringing a universal war to an end once and for all and permanently resolving what can only be seen as an unwinnable scenario. All wars need an end. Especially one that terrorizes the entirety of the universe. When you find out you’re the only one in the entirety of the cosmos who can save it, how far are you willing to go? Is the battle truly unwinnable? Only time will tell.