Sometimes the Best and Most Surprising Stories Come from Family 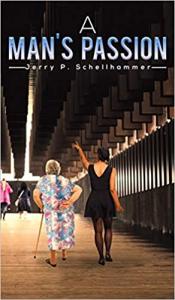 Fuel Your Ideas and Make It Happen!

Gave me a good perspective of inner racial relationships in the early days & in the south, a bit of history & the future. ”
— Amazon Book Review

RED DEER, ALBERTA, CANADA, June 7, 2022 /EINPresswire.com/ -- How much do we really know about our own family and how it became what it is? Are we aware of the intrigues, juicy tidbits, and stories that may actually be worth telling others from outside? Those stories that are actually worth publishing or making into a movie?

In A Man’s Passion, author Jerry P. Schellhammer tells us about Dorothy “Dot” Black and her great-grandmother Hattie as they make their way to Montgomery, Alabama, and the Peace and Justice Museum.

Hattie tells Dot about how she grew up in the rural south. While the tales of her childhood involved simpler and happier times free from the modern ills, these were also the times when the races were still segregated and racism was the norm.

Of course, what story is complete without love? Hattie’s story has plenty of that too, not to mention characters that Dot never thought existed outside of the most exciting novels.

As Hattie tells Dot more about their family history, Dot begins to appreciate the past events that built up her family even more. As the story progresses she also gets an idea of what America has turned into and what it still needs to become.

If people want look for a good story, they usually go to the histories of the famous people, the rich people, and those whose achievements are a matter of public record. The family history is one place they don’t usually look.

Which is a pity, considering how many families have stories that aren’t really shared with anyone outside of it. Everyone has an interesting story to tell, even the most distant relative we can imagine.

This book will make us rethink our own family history and the colorful people who made our family what it is today.

“I truly enjoyed this book! It gave me a good perspective of inner racial relationships in the early days and in the south, a bit of history and the future,” one reader says about the book.

This book and other titles will be featured in the Toronto Book Festival on June 11 and 12 this year.

Jerry P. Schellhammer was born in San Franciso in 1958. Two years later his family moved to Washington State where he went to school, becoming active in extracurricular activities including little league baseball and Boy Scouts. Here he also earned his Eagle award and rank. He graduated from Hanford High School in 1979 and earned his B.A. in English from Washington State University.

It took a life-changing experience for Schellhammer to become a writer; that experience was a stroke. After publishing a memoir called This Life: My Life After My Stroke, he followed up with It Gets Darker as You Go; and recently self-published novella, Edge of Darkness: Four Seasons, Book One, which are a series of six novellas with a running plot.

He is still working on the concluding novella.