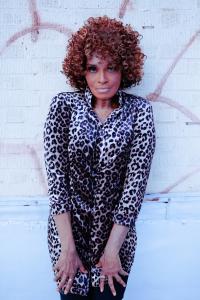 CHICAGO, ILLINOIS, UNITED STATES, February 14, 2022 /EINPresswire.com/ -- What was it like to work with a global rock icon in the 1970s? Many can speculate, and many do, but few actually know. This is where Ava Cherry and her inspiring life comes in, which she has lovingly shares in her brand new book, ‘All That Glitters: The Ava Cherry Story’.

Ava Cherry is a singer, producer and fashion icon. Her personal and professional collaboration with international superstar David Bowie in the 1970s fostered a strong soul influence on Bowie's hit album Young Americans. She was also instrumental in the evolution of the proto-New Wave band The Astronettes. Cherry's formative years on the Chicago black music scene shaped her soul music sensibilities that would later influence the work of numerous artists following in her footsteps. Cherry was later a backup singer for Luther Vandross and eventually struck out on her own to launch a solo career, working with the greats of the industry. Having worked with Curtis Mayfield on her own debut music such as ‘You Never Loved Me’, and ‘Love is Good News’ , she proved that she has true talent and staying power in the industry. She is currently enjoying a resurgence on the international music scene.

Next up for Ava Cherry, she is continuing to shine all over the world. Cherry will be headlining her own night of the annual Dublin Bowie Festival which runs April 17th-24th, her headlining night being April 22nd. She will then be jumping over to Germany, where she will be working with producer Rob Hardt (Keith Sweat, Musiq Soulchild, En Vogue) and David A. Tobin (Harlem Gospel Singers) on her next single.

Cherry’s story is moving, inspiring, and downright remarkable. She made a name for herself in the music industry, and she has enthralling stories that will keep you on the edge of your seat. You can read all about her beautiful life story in ‘All That Glitters: The Ava Cherry Story’. And keep your eye out for an upcoming film about her life and career with Bowie!

Be sure to pick up her book - available anywhere books are sold, and keep up with all of her other amazing work through Instagram and Facebook!