Tapping into the Unknown to Reveal and Heal a Perceived Reality 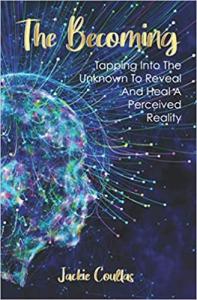 Fuel Your Ideas and Make It Happen!

The Becoming by Jackie Coultas

RED DEER, ALBERTA, CANADA, June 22, 2022 /EINPresswire.com/ -- This book is about the abilities some of us have. Everyone have powers we may or may not be aware of, and Jackie Coultas’ power is to heal animals as well as people of their past karma.

During her early childhood years, Coultas was blessed with the power of clairaudience, the ability to hear things that others may not be able to.

But as she grew into her teens she lost touch with those powers. It was as if they became drowned in the routine of everyday life. Almost forgetting she had them in the first place, Coultas moved on, becoming an adult, getting a job, then becoming a wife, a mother, and a homemaker.

In her words, it seems she “forgot about her soul contract with God from her formative years”.

Later in her forties, she developed clairsentience (the perception of what isn’t normally perceptible) and clairvoyance (the ability to observe things that will happen in the future). The latter gift allowed her to receive messages that started coming in more and more frequently until she realized she was not meant to live the life she had now.

In life everything happens for a reason, even those things that make absolutely no sense or seem downright unjust or unfair. This is called the law of karma. Depending on what is done in this life or even in a previous one, everyone might have an accumulation of the good or bad karma.

Everyone can do something about the bad karma, as shown how by Jackie's book.

“I've sat reading it for the past two evenings and thoroughly enjoyed it, I've just finished it and I'm sat feeling slightly emotionally (not sure why). It is very inspirational and has reminded me of why we are here,” one reader says about this book.

This book as well as other titles will be featured in the Toronto Book Festival on June 11 and 12 this year.

To say Jackie Coultas is just an author would be an injustice. Aside from writing, she has studied physiology, metaphysics, religious studies and philosophy, and even healing arts such as aromatherapy, Swedish massage, and acupressure.

A horse lover since she was a young girl after seeing her first horse show in the United Kingdom, she also attends clinics in horse breeding, nutrition, and riding. She also works as a horse transporter and trainer.

Aside from writing she also regularly gives talks to the Yorkshire Federation of Complimentary Therapies, the Conservative club, the Liberal club, and has also been featured in local newspapers and magazines.