"THE AMAZING DIET" Is Pleased to Announce that It Is Going Public in The USA. $150 million Capital Raise Announced. 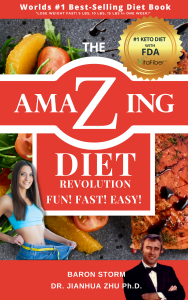 "THE AMAZING DIET" Is Pleased to Announce that It Is Going Public in The USA. $150 million Capital Raise is Announced. 10 Million Shares to be Issued @ $15.00.

REDDICK, FLORIDA, USA, June 9, 2022 /EINPresswire.com/ --
"THE AMAZING DIET" is pleased to announce that it is to become a USA Public Company with a Private Placement of $150 Million USD through the planned issuance of 10 million shares @$15.00 per share.

"The unprecedented success of "THE AMAZING DIET" (www.theamazingdiet.com) and AMAZING FOODS INC. has generated such huge interest on a global scale that becoming a USA public company was a natural evolution of the project," says Baron Storm, Founder and CEO of the company.

"Many years ago I created my first daily network television diet and exercise show that is now known as the very popular KETO diet. This is a $15.5 BILLION dollar business in the USA alone. Globally, the KETO diet is worth well in excess of $150 billion. The diet and exercise show ran everyday for three years on the CTV network show across Canada and the USA. It resulted in over 1 million people writing letters stating how much weight they had lost and how great they felt.

At the time of the television show the word KETO (which is short for Ketosis) was a medical term. It was not associated or referenced to a diet plan.

However, all these diets have one major problem. 99.9% of people starting these diets fail. The reason is that they are all sugar free. After a few weeks on a diet people start to have their brain asking "Where is my piece of chocolate? Where is my candy? Where is my Ice cream? When anyone is on a diet there are two things that the diet plan has to address to be successful. The first is the food required to fuel the body, the second to provide recipes that deal with the mental cravings for something sweet. Typically this is the reason that most people after a few weeks or a couple of months of being on a diet fail. It is these mental cravings that cause 99.9% of diets to fail.

"THE AMAZING DIET" due to some incredible science and the development of arguably the world's best sugar replacement product, which is the ONLY product of it's kind to have all three major health authorities approvals in place. (the FDA, Canada Health, and the European Food Safety Authority (EFSA) plus approvals in approximately 40 other countries) This now allows those on "THE AMAZING DIET" to enjoy recipes that include, chocolate, ice cream, candies and many other rich sweet tasting foods and still lose weight.

"THE AMAZING DIET" is also a best selling book which provides one of the best, proven, and well tested diet and exercise plans in the world today. Order a copy from 'THE AMAZING DIET" website at www.theamazingdiet.com

What have you got to lose?