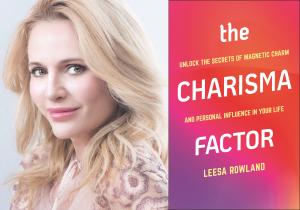 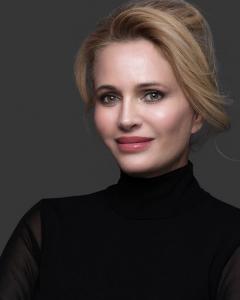 NEW YORK, NEW YORK, UNITED STATES OF AMERICA, February 15, 2022 /EINPresswire.com/ -- Business owners, influencers, and anyone looking to build confidence can now embrace their individuality, discover their authenticity, and empower themselves like never before with The Charisma Factor: Unlock the Secrets of Magnetic Charm and Personal Influence in Your Life, the latest book from actress, philanthropist and author Leesa Rowland. The Charisma Factor is a follow up to Leesa’s best-selling self-help/motivational book Discovering the It Factor within You: Developing Your Charismatic Personality. The Charisma Factor is available now in stores nationwide and electronically.

Published by Hatherleigh Press, the 224-page self-help book’s synopsis is as follows:
Charisma is an unseen but powerful force that has many different facets. Charisma is a special and compelling spark that makes someone unique, and sets them apart from the rest of the crowd, and it is something all people possess – whether they are aware of it or not. Devoting a little time to connecting with our inner selves, learning what makes us truly special, and incorporating this magnetic quality into our personality can have untold benefits on our lives. The Charisma Factor is the ultimate handbook that unlocks the mysterious formula for charm and influence. Whether it's someone who lives in the spotlight, or a college graduate just starting out on a career, this book will improve the way people communicate and interact with others with useful lessons and Leesa's personal tips.

Author Rowland explains this was the “best time” to come out with the book. “I think it’s especially important now and when we’re coming out of the pandemic. I want to help people become the best that they can be. One of the chapters that’s a really strong chapter is about different charismatic personalities, the traits that they have, and their magnetism. It’s like a behavior study really,” Rowland says.

About Leesa Rowland:
The daughter of an artist and college professor, Leesa Rowland grew up in Austin, Texas where she studied broadcast journalism and later became a classically trained actress at the world-renowned Stella Adler Studio in Los Angeles.

Beyond her extensive career and credits as a film and television actress, she is also well-known for her work as a philanthropist and animal rights activist. A vegan dedicated to healthy eating, she has been active with the national non-profit organization Last Chance for Animals since 1989 and is the president of the New York non-profit group Animal Ashram, which she founded in 2013.

As she continues to develop her work as a philanthropist and involvement with these and other charities while exploring new dramatic roles, Leesa recently began adding something else exciting to her sizzle reel: comedienne. A lifelong sitcom fan, she has been taking comedy classes with Richard Kline - the actor best known as Larry on the late-1970s classic Three’s Company - in Los Angeles. She has also been studying improv and sketch comedy in New York at the famed Upright Citizen’s Brigade whose alumni include Amy Poehler, Horatio Sands, Matt Besser, Matt Walsh and Ian McKay.