The Darkness at Dawn by Pamela Roberts Lee 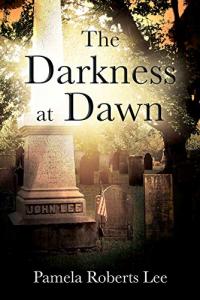 How much guilt can a man endure?

Dive into a world of events that have become history, as two men struggle for wealth, power, and love. Author Pamela Roberts Lee’s novel, The Darkness at Dawn, will take you back 400 years to New England’s 1600s with characters you never imagined and a story of how morality and faith are tested in turbulent times.

The story follows a young Puritan convert and 16th Century ancestor of England’s Prince William and Prince Harry, John Lee, as he adapts to the new world and the Puritan religion. It’s 1634 and a ship with Puritans settlers struggles through a storm in the middle of the Atlantic on its way to Boston. In the midst of the storm, 13-year-old John Lee is startled to see 19 year old Richard Hawkes, a thief and murderer at 19, steal his Puritan church's gold inlaid chalice. When the chalice is missing the next day, Richard Hawkes confronts John Lee and threatens to kill Grace Newell, a fellow ward of Puritan William Westwood, their congregation’s lawyer, if John does not conceal the theft. John is forced to conceal the theft and take an oath of secrecy to God to protect the life of Grace. This act will lead to a 40-year conflict between John and Richard.

John’s guilt over his oath grows through the years as Richard lies, steals and murders his way to wealth and power. John has no proof of Richard’s crimes, other than the theft of the chalice, and is compelled to hold to his oath as he believes that breaking the oath would be a sin. Meanwhile John becomes a constable, Indian teacher and respected member of the community. Years later, as Richard’s crimes start to be revealed, Connecticut’s Governor asks John to investigate Richard. Brought to trial, Richard, in an incredible act of hubris, calls John Lee as a defense witness. Confronted with a question he cannot answer without violating either his oath to God or his oath to the court, John finds the answer to his dilemma in a story told to him by one of his Indian students.

Pamela Roberts Lee, a successful author of Alamogordo, New Mexico, tells a compelling story of her ancestor, John Lee. The author is a retired U.S. Air Force Reserve Judge Advocate Colonel and former U.S. Department of Justice Trial Attorney. She believes readers will benefit from learning about America’s turbulent 1600s in The Darkness at Dawn.

Get The Darkness at Dawn at PamelaRobertsLee.net, Outskirts Press (the publisher), Barnes & Noble, or Amazon where it has received five star reviews from readers.