The In-Between Artist: The Story of Tony D'Orazi 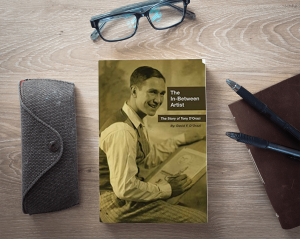 This is a true story of the life of Tony D'Orazi who went through all of the above...and then some.

Tony then became well known as Uncle Tony O’dare, “the first cartoonist of the air” on KTLA, which was one of the first big television stations in the USA.”
— David D'Orazi

GUADALAJARA, JA, MEXICO, December 7, 2021 /EINPresswire.com/ -- “Tony’s D’Orazi’s father, known as Big John D’Orazi, was an early 1900’s Italian immigrant, who managed to raise his family from three businesses for many years, a bar, a hotel, and a grocery store. It was difficult to keep food on the table, since Big John, and his wife Rose would eventually have 11 children, (8 boys and 3 girls) together. And there would have been 13 children, but two of them passed away at birth.”— Excerpt from The In-Between Artist: The Story of Tony D’Orazi by his only surviving son, David D’Orazi.

Author David D’Orazi will be one of the featured authors in the upcoming Guadalajara International Book Fair 2021 with his published book title, The In-Between Artist:
The Story of Tony D’Orazi. Tony’s struggles in his life and successes have been narrated by his only living son, David F. D’Orazi. It talks about Tony’s early prodigy years, growing up in the small town of Missoula, Montana, to his ascension into an award winning artist by way of New York City, and at the World’s Fair in Chicago, as well as doing a vaudeville tour across the United States. In Tony’s life story, David F. D’Orazi also talks about his father Tony’s early days working for Walt Disney, as one of the original animators for the first full length award winning animated movies of all time, “Snow White and the Seven Dwarfs.” Tony then became the first cartoonist of National Radio and Television in the late 1940’s and the 1950’s, when that was all there was in America. Tony then became well known as Uncle Tony O’dare, “the first cartoonist of the air” on KTLA, which was one of the first big television stations in the USA. His TV show became number one in kid’s TV shows in America for nearly 5 years. He actually won an Emmy for his show in 1948. He actually taught kids how to draw cartoons and animated characters, on national
television.

“Ultimately, Tony’s story proves that no matter what obstacles he faced in life, ART had always been able to find a way in his interesting life. It is truly a feel good, and a motivational easy read story, about a world renowned artist in his time. This book has been given many 5 star reviews.” — David F. D’Orazi.

David F. D’Orazi is a successful salesman and California native. He is still residing in the Los Angeles area. He wrote about his father’s life, Tony D’Orazi, drawn from journals and scrapbooks dating from the early 1920s and beyond.

Book copies are available at Amazon, Barnes & Noble, and other online book resellers.

Authors Press is an online publishing company and book reseller catering to the needs of both experienced and aspiring authors as well as readers. They offer the best publishing solutions for full-time and independent authors. The company’s team of proofreaders, editors, designers, and publishing professionals are committed to achieve industry standards for their client’s work to be published, marketed, and sold.