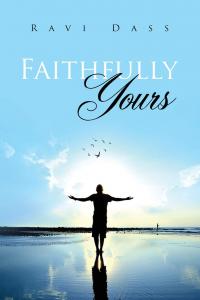 Faithfully Yours by Ravi Dass

UNITED KINGDOM, December 6, 2021 /EINPresswire.com/ -- "Faithfully Yours" was written and was published by the late Ravi Dass as a dedication to his loving wife and an exploration into the divine. The writing process began when she was well but it was published after her passing in May 2011. Ravi Dass himself passed away in 2015. His son, Anoop Dass, now pays tribute to his parents by republishing the book to share his father's message of faith and his insights on spirituality.

In the pages of Ravi Dass' book, he explores how humans turn to the divine for guidance in times of trouble, beseeching the almighty when all other options seem lost. So Dass posits, what if these deepest implorations did come true, what if the supreme being did come to teach humanity a new path to morality and peace? With "Faithfully Yours" he explores a world where this happens to see if humanity would really listen to the literal word of God. With this he conveys his personal idea of what God wants of people and, in light of that revelation, how the world can be made a better place for all to live in.

In its pages, he depicts a different society where society makes different choices, the outcome of which has profound ramifications. With this, he allows people to imagine, in the fashion of the John Lennon song, and envision different world and how people would act, individually and collectively, if they were freed from the constraints facing them in real life. Readers can take this as a pleasant and escapist flight of fancy or perhaps as a reference point, an inspiration to strive for such a world so that they might have a shot at actually having the choices available to humanity in Dass' tale.

By republishing his father’s book, Anoop Dass aims to honor his father by sharing the gift of his creation, “Faithfully Yours,” to readers who might find solace and wisdom in its pages.


About the Author
The late Ravi Dass travelled the world, delving into everything from the Beat Generation to Indian spirituality to Silicon Valley capitalism.

Anoop Dass was born in the United Kingdom and was educated in India. He has worked in the U.K. ever since, first as a data analyst and then in the finance team of the NHS since 2004.