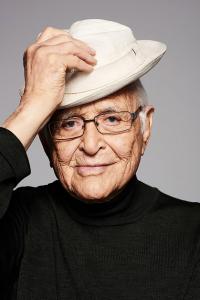 Television trailblazer Norman Lear talks about how "All in the Family" made it on the air at an author talk for Live Talks Los Angeles on Dec. 15, 2021. 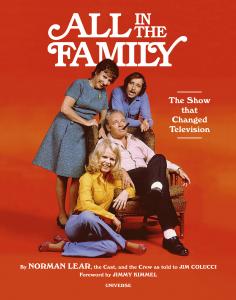 Lear's new book picks 50 special episodes that exemplify the humor and topicality of "All in the Family." 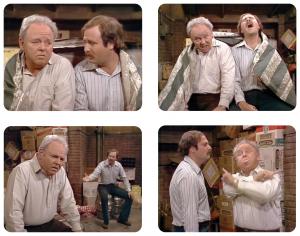 "All in the Family" pitted Carroll O'Connor as Archie Bunker and Rob Reiner as Mike Stivic against each other in the political and cultural wars of the 1970s.

Lear recalls fights with the network and how show pushed social, political and cultural boundaries

After we shot the first pilot... ABC asked me to make script changes to soften Archie, but I politely refused.”
— Norman Lear, creator of "All in the Family"

LOS ANGELES, CALIFORNIA, UNITED STATES, November 18, 2021 /EINPresswire.com/ -- An in-depth conversation with television legend Norman Lear will premiere at Live Talks Los Angeles on Thursday, December 15, 2021, 6pmPT/9pmET. In a taped, in-studio talk with co-author Jim Colucci, Lear discusses his new book, "All in the Family: The Show That Changed Television." The book celebrates the 50th anniversary of the debut of "All in the Family," the groundbreaking hit series Lear created. They discuss some of the 50 episodes chosen for the book which exemplify the show's humor and relevance. The event includes clips from scenes discussed. Details on tickets can be found at Live Talks Los Angeles.

Television was changed forever in 1971 with the premiere of "All in the Family." Archie Bunker (Carroll O’Connor), his wife Edith (Jean Stapleton), daughter Gloria (Sally Struthers), and son-in-law Mike “Meathead” Stivic (Rob Reiner) instantly became—and half a century later still are—four of the most iconic characters in television. Lear, now 99 years old, takes fans behind the scenes of the innovative sitcom and shares his take on 50 episodes that exemplify why "All in the Family" remains as funny and relevant as ever. Its boundary-pushing approach to hot-button topics like race relations, homosexuality, war, religion, and social inequity are examined with commentary from its costars, writers, directors, and guest stars, as well as prominent contemporary showrunners—a veritable who’s-who of television royalty.

"After we shot the first pilot, 'Justice for All,' ABC asked me to make script changes to soften Archie, but I politely refused," remembers Lear in the book." We recast Gloria and Richard (later named Mike) and we shot another pilot 'Those Were the Days.' This time executives were simply frightened of the possibility of a bad reaction to a bigot on the tube. Now, when I think about how it turned out, everything happened for the best. Between shooting the first two pilots in 1968 and '69 and when 'All in the Family' finally aired in 1971, the country was that much further into political and social change and had a new president, Richard Nixon for Archie and Mike to argue about."

Jim Colucci’s interview with Lear revisits casting decisions and how the scripts were borne of the news of the day, familial influences, network mandates, political correctness, and behind-the-scenes stories. With previously unseen notes from Lear, the book features script pages, production designs, and a foreword by superfan Jimmy Kimmel, who revived the show in 2019.

Producer, philanthropist, and activist Norman Lear won his first Emmy in 1971 and his most recent one in 2020. His memoir," Even This I Get to Experience," was published in 2014. He is also the founder of People for the American Way. Jim Colucci is a television historian and writer. He is the author of "Will & Grace: Fabulously Uncensored," and the New York Times bestseller "Golden Girls Forever."

Ticket options for the event include signed books and a Live Talk LA tote bag. The event will be available as a video on demand through December 18. More information can be found at Live Talks Los Angeles.

About Live Talks Los Angeles
Live Talks Los Angeles curates and produces on-stage conversations featuring writers, filmmakers, actors, musicians, humorists and comedians, chefs and thought leaders in business and science in various venues in Los Angeles. In response to the pandemic, Live Talks Los Angeles has been offering streaming and recorded virtual talks on its YouTube channel. Live Talks Los Angeles launched in May 2010 at a local art gallery with 18 talks that year. Since its inception, LTLA has presented over 350 events, and its videos have been seen in 156 countries with over 15 million views via YouTube, Vimeo and also on Facebook.