Undercover: New Book Exposes the Truth About The War on Drugs 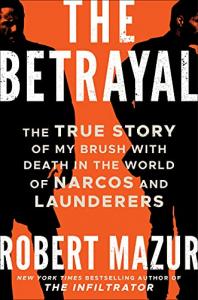 His new book, “The Betrayal”, details a covert operation he carried out 3 years after the events of “The Infiltrator”, at a time when the drug kingpins exposed in his first deep cover assignment had issued a half-million-dollar bounty on his head. In this second undercover assignment, using a new covert identity to infiltrate Colombia’s Cali Cartel and underworld figures in Panama, he was nearly killed at the hands of corruption within his own department.

The Betrayal takes the reader on a suspenseful underworld journey of real-life events, an experience that opens eyes to the corruption and brutality of organized criminal organizations so powerful that they control countries.

Mazur can tell you why 98% of the underworld’s fortunes go unseen by the world’s law enforcement and regulatory authorities.

Meet Robert Mazur:
Robert Mazur spent 27 years as a Special Agent for the IRS Criminal Investigation Division, the U.S. Customs Service, and the Drug Enforcement Administration. He is the Best-Selling Author of the memoir The Infiltrator, which was adapted into a major motion picture starring Bryan Cranston.

Mazur’s writings about money laundering, international drug trafficking, and corruption have been published in many journals and media outlets, including The Wall Street Journal and New York Times. He has appeared on more than 1,500 radio and television shows, including NPR’s All Things Considered and MSNBC’s Morning Joe, as well as CNN, PBS, ABC, CBS, NBC, Univision, BBC, and other major networks.

Robert Mazur has earned global acclaim as one of the world’s leading experts on the financial escapades of the underworld. For years, in the eyes of organized crime leaders, he was a highly successful mob-connected money launderer that helped manage their illicit fortunes.