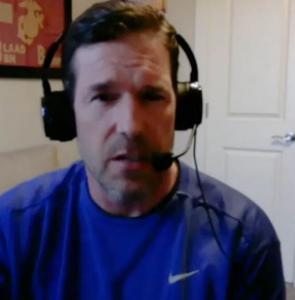 We give thanks for all those that have served and to the ones that still fight to keep our freedom.

Become what you want to be for you, not because others want you too!”
— John C. Morley
FRANKLIN LAKES, NJ, USA, February 14, 2022 /EINPresswire.com/ -- This Friday our World will learn the challenges that transpire when an Air Strike Combat is ordered. Col (Retd.) Wayne Phelps will be our featured guest to give many personal stories, about how those who fought and continue to fight for are freedom achieve their responsibilities. Weapons originated with a stick and rock but did you know how and why they evolved to the sophisticated level of warfare we have today. Most average citizens don't actually understand what it means when a drone strike is conducted. Few civilians may understand that their are humans which are operating, maintaining, watching the video feed and controlling all the actions of the drones mission. Thus, its important to know that their is a 100% human element to carrying out the removal of people and that it is not autonomous .

An RPA is known as a Remotely Piloted Aircraft and it consists of usually a pilot, weapons operator and a sensor operator. The pilots job is to fly the drone to the specified coordinates as directed my their leader. Weapons operator fires the payload and the sensor operators job is to ensure they are able to hit the target with the highest level of accuracy. There are UCAVs or Unmanned Combat Aerial Vehicle which are refereed to as a combat drones and it creates its lift by by aerodynamic forces. Dating back to before WWI they were call RPAS or known as Report Piloted Aircraft System and now today we refer to them as RPA'.s.What is also interesting to note is that RPA's are deployed 24-7 in some areas and serve more as a basis to acquire intelligence to facilitate decisions needed on the mission.

With being in any unit of government that is engaged in combat it becomes necessary to overcome people's resistance to carry out their tasks such as removing a target, other wise known as taking someone's life. They never say to "fire", "shoot" but instead use words like you are clear to take them out. Maybe they might say the target is hot and you are clear to remove it. This might sound weird but there is a reason they do this and it is to desensitize the soldier to dehumanize the crew. Hearing stories about during this interview will keep the viewers on the edge of their chair with anticipation. The services always asks someone are they comfortable with killing someone and if they refer no, they just put them in another unit that would not be doing those specific tasks.

The JMOR Tech Talk Show Feb 18th & 25th 2022 the channel will remember all those that gave their lives for us and those that continue to make sacrifices for our great country. Mr. John C. Morley the Show's Host will lead a captivating interview and Mr. Marcus Hart the Show's Co-Host will be there to add some additional thoughts and share his perspectives.

Whether the person is an inventor, author or other thought leader The JMOR Tech Talk Show invites them to reach out and complete an application to apply to be on this great Tech Show that is delivering important insights about technology, trends, authors, and inspiration to help us all become better versions of ourselves.


Col (Retd) Wayne Phelps wrote a book that reaches every bone, nerve and cell in your body about the entire process a solder goes through each day and the many trials and tribulations required for their job. Whether your a solder or not it would be a great idea to get his latest book titled On Killing Remotely: the Psychology of Killing with Drones.